Preparations for a journey to the west prevented me from calling on you yesterday before I left Albany.  The frankness with which you have always had the goodness to communicate with me on political affairs rendered me very desirous to ^see^ you that I might become acquainted with your views & communicate to you my own.

I can not support Genl. Jackson for the next President.

In deciding between Mr. Adams & the General no question of principles can be involved.

The great question of State Rights which possibly you may recollect I mentioned to you shortly after your first election as in my Judgment the only real national question about which the people of this Country were and would be divided can not with men of sense effect the election between these gentlemen. Mr. Adams (whatever Mr. Clay may have done) has not to my knowledge sinned against the State Sovereignties. Mr. Madison ^was^ at the Convention and at least ever since has been an Amalgamation man & Mr. Monroe’s Administrations did undoubtedly tend to encroachments upon State Authorities, but to these Administrations the Republican Party of this State (and you were in its First Ranks) afforded a zealous & powerful support. The same Administrations were supported by the “Southrens”. I put the question boldly what has Mr. Adams said or done in derogation of State Rights? Gen. Jackson has indeed some years ago given a specimen of his respect for the State Authorities in his correspondence with the Governor of Georgia. Mr. Calhoun one of his most prominent supporters is in principle a high toned Hamiltonian, Amalgamation Federalist. The Majority of the people of the South have never during the Presidency of a Citizen from the Slave holding States, ^notwithstanding^ the passage of a Law for making the Cumberland Road and Chartering a Bank United States Bank &c &c manifested any allarmn for the Independence of the States.

There can be no preexisting party obligations which lead to a preference of Gen. Jackson.

Mr. Adams <illegible> before his election had faithfully served the Republican Party more than twenty years. Since his election his appointments have been more exclusively Republican than those of his immediate Predecessor. Genl. Jackson in his letter to Mr. Monroe has solemnly avowed his principles in relation to Party obligations.

No man will hazard his reputation by Asserting that Mr. Jackson is personally more fit for President than <illegible> Mr. Adams.

During a peace in Europe the Middle Eastern & Western States can not exist without the protection of the their manufacturies afforded by the Tariff, but without referring to the danger of the utter demolition of “The American System” if the Party who support Gen. Jackson should be successful I put my preference for Mr. Adams upon the ground of his Superior qualification for the office and because he is a Northern man or rather because the real Ground of opposition to him is on account of his being a Northern man.

The Southern Atlantic States never have & never will support a northern Candidate for the Presidency. I prove this by the history of those States. “What has been will be”.

In 1815, 16 & 17 they refused altho some of them were understood to be committed to support Gov. Tompkins who at that time was decidedly superior to Mr. Monroe.

In 1824 altho the Madisonian Phalanx of the South was for <our brother>, and altho John Quincy Adams had devoted twenty years of his life in efforts to dissipate their prejudices, notwithstanding his great talents & high moral qualities he did not receive a single vote from the Southern Atlantic States.

At the present juncture when the Politicians of that section can not deny but that in the single State of New York there are many men possessed of better qualifications who accord with the Southern Politicians in their political creed as proposed, <better> possessed of better qualifications for the office of President than Gen. Jackson, yet they decline supporting any man from this State or from the Northern States, altho’ if the South would in good faith support a northern Candidate his success would be certain whereas by supporting a Southern man the issue is doubtful. Mr. Clinton & yourself have given public evidence that you in general accord with the Southern opposition in principle as to measures. Either would be sure of success with the support of the South. Why do they not take this course? By pursuing it success is certain by the support of Gen. Jackson it is dubious.

I ask then if they will not now support a northern man when will they? If New York & Pennsylvania shall now desert the Eastern & Western States (natural allies) and by their act consign the Executive Authority to the Slave holding States I have neither faith nor hope that either you or I shall live to see another President North of the Potomac. The western States altho’ connected by the same agricultural, commercial & manufacturing interest will never again unite their political destinies with a section of the Country which can not and will not act together ever in its own defence. In short I consider that the success of Gen. Jackson will forever prostrate the political importance of the portion or section of the Country which gave me birth. I can not prove myself a traitor to it. I can not be charmed with party names. If Republicanism is so far degenerated that it means nothing more nor less than a grant in perpetuity of the Executive Authority to the Slave holding States I am not a Republican.

For you my Dear Sir, you know I entertain the most sincere respect. Allow me to say that as a northern man I am proud of you, but if you assist to atcheive a triumph for the “Southrens” they indeed will bestow upon you every secondary honors which may be required by your Friends but there is a boundary beyond which by their consent you can never pass. “Were I not Alexander I would be Diogenes”

I had written thus far before I left ^was required by the stage to leave^ Schenectady. Since which time I have been constantly engaged. I have doubted whether I ought to give you the trouble of reading so tedious a communication. I am also apprehensive that you will suspect me vain enough to imagine that I have <illegible> the question suggested considerations which had not before occurred to you. Such is not the fact. My only object is to furnish you without <illegible> disguise with ^the^ prominent reasons which have induced me to arrive at the conclusion that it will be my duty to vote against Gen. Jackson. In submitting my thoughts thus freely to you ^apprehending as I do that you differ from me in opinion^ I afford you the strongest evidence of the high respect I entertain for your candor and patriotism. 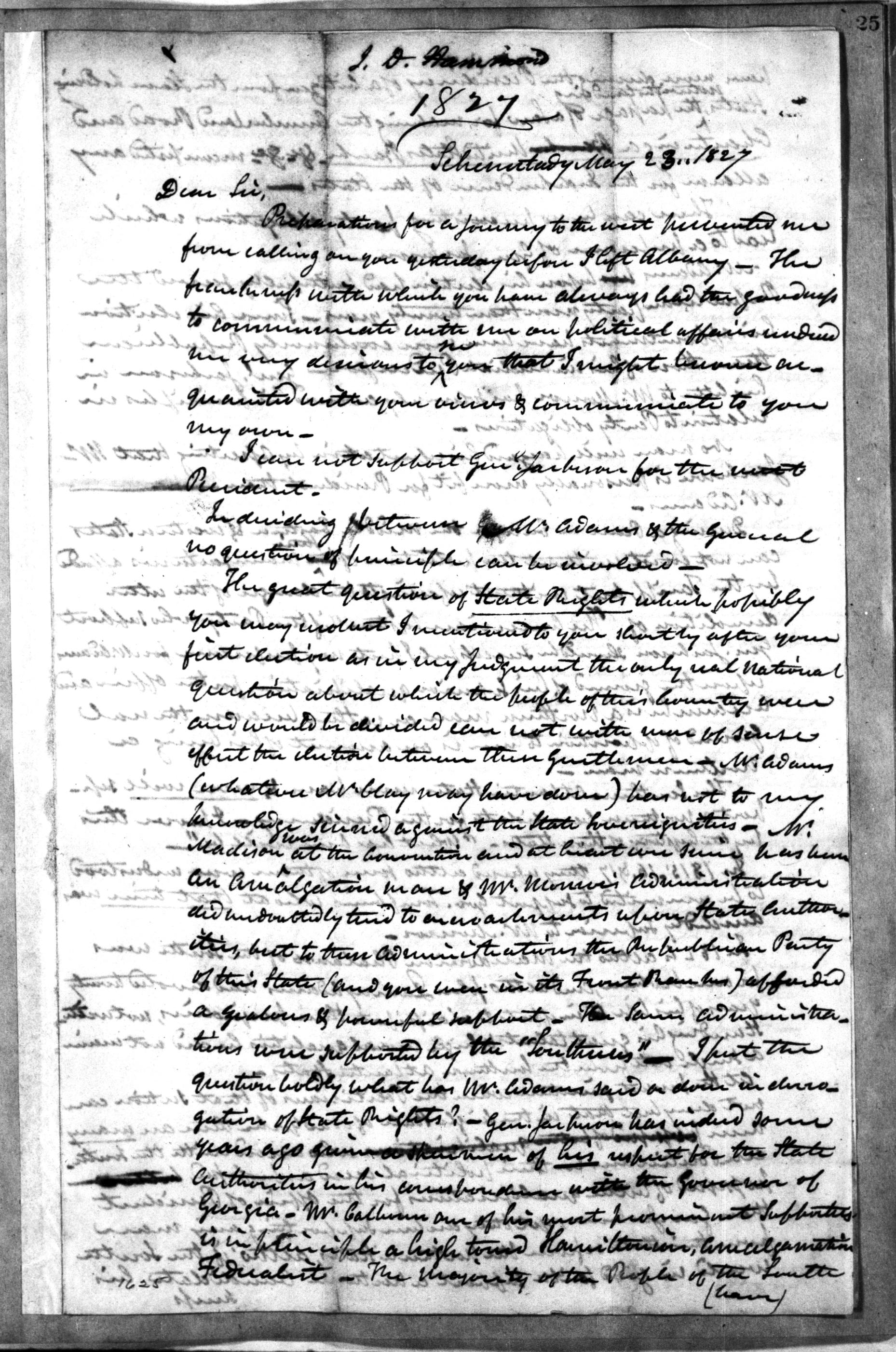 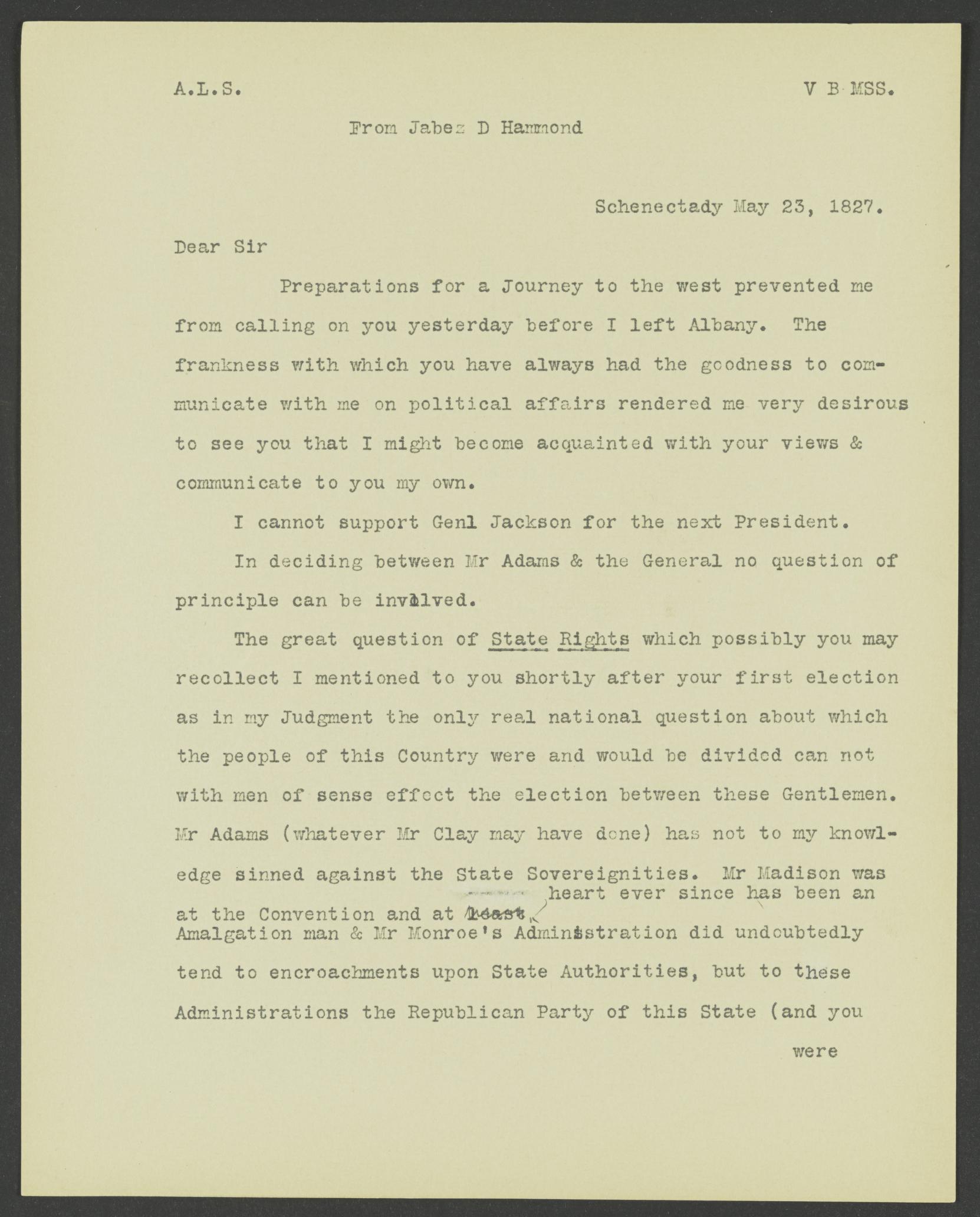 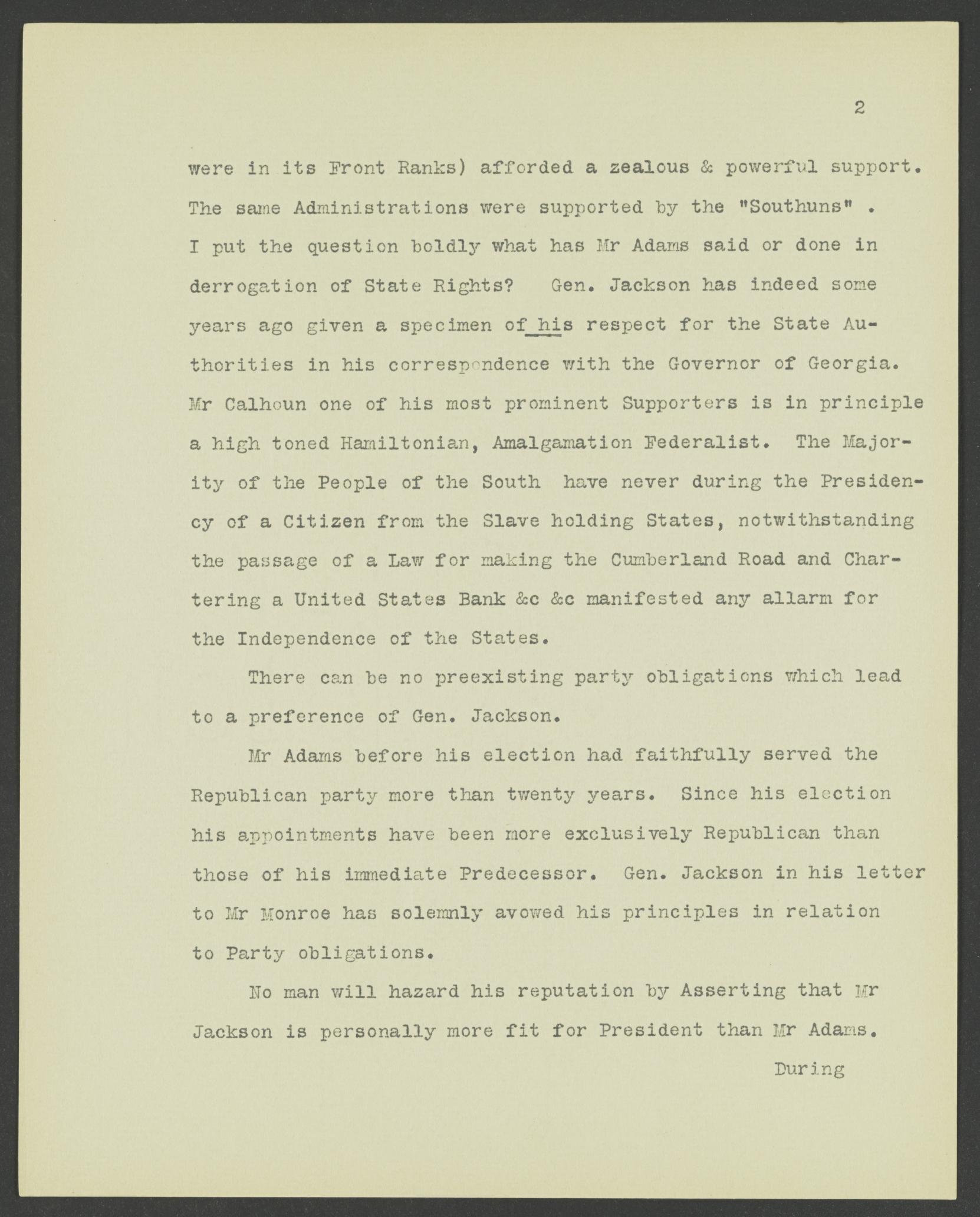 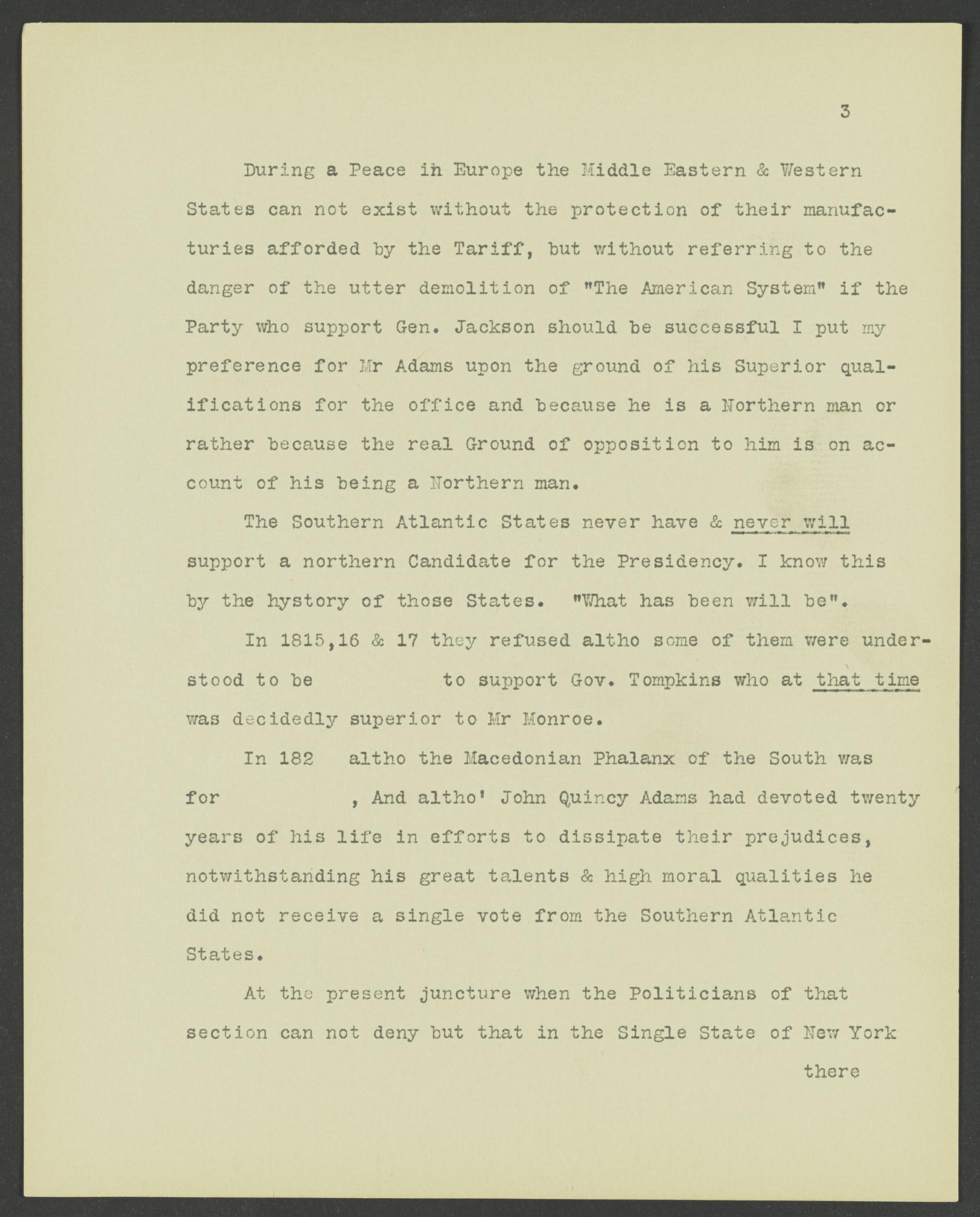 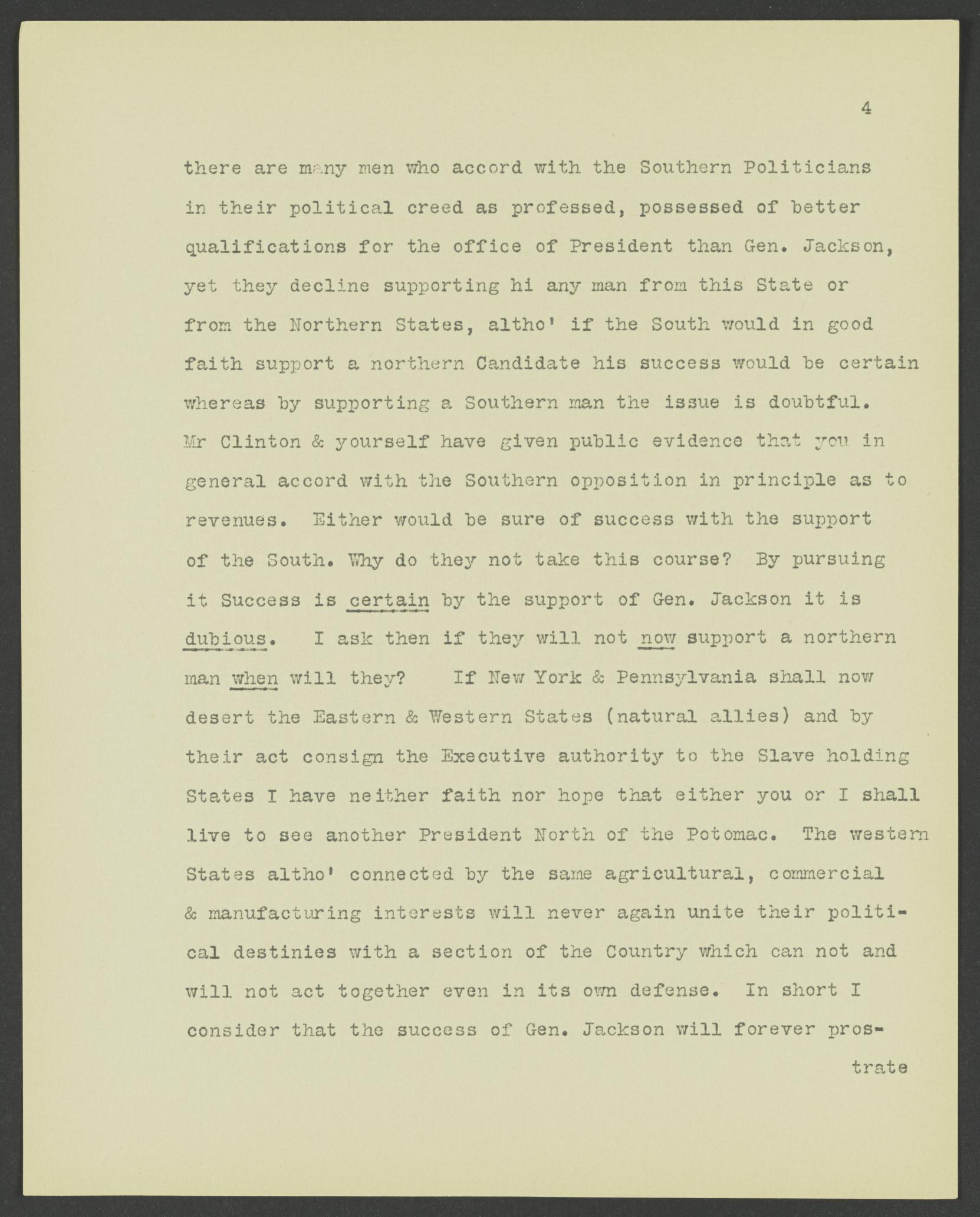 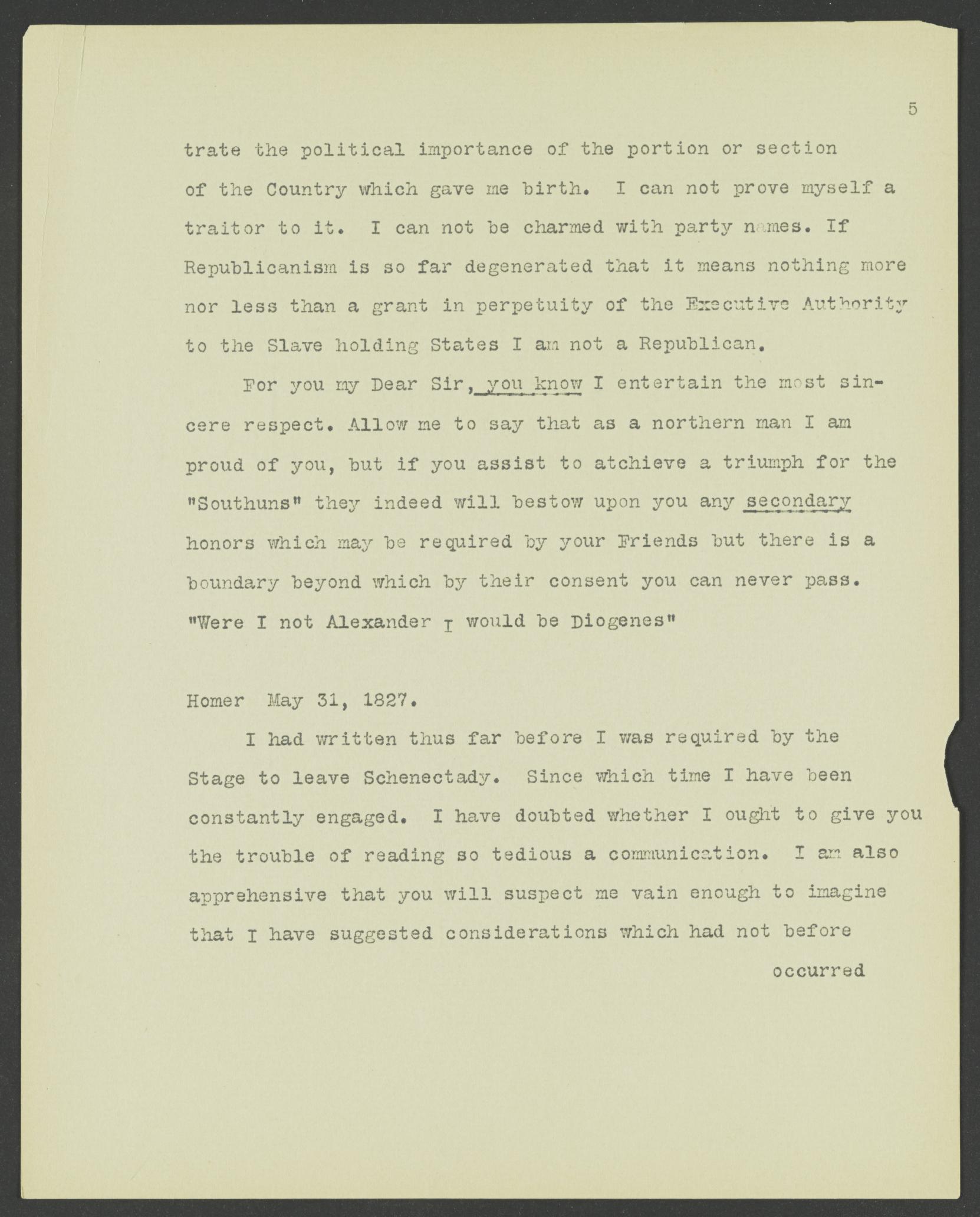 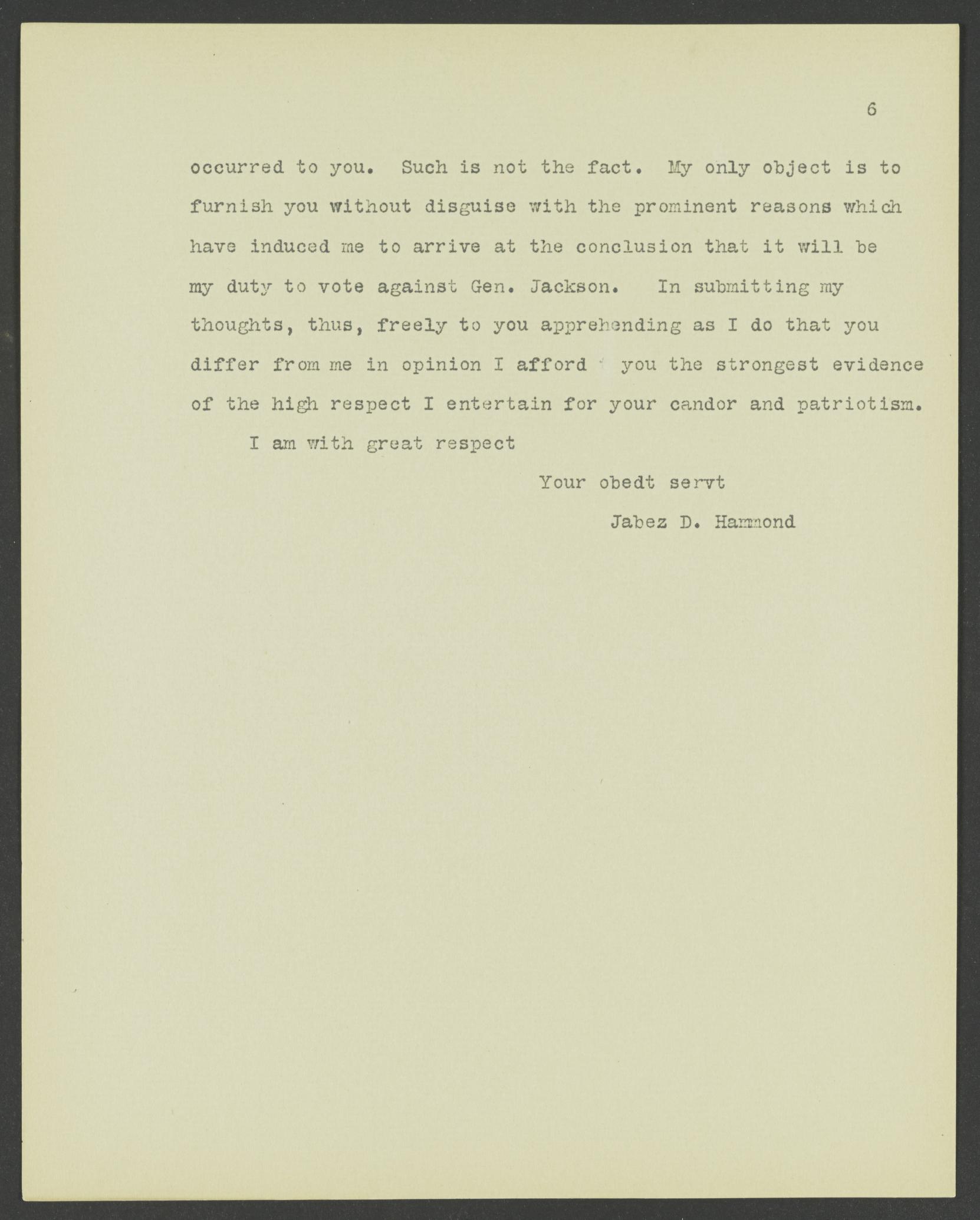