You will have observed an article in the Argus upon the subject of a national convention. The matter will soon be brought under discussion here & I sincerely wish you would bestow upon it, some portion of your attention. It was first suggested to me by the Vice President; he & Mr. Ingham of Penn. are the only persons, with whom I have as yet consulted. They think it essential. It will be an important movement & should be fully and deeply considered. The two papers in the city of N. York devoted to Mr Clinton’s views the Statesman & Enquirer are you see out against it. Their motive is obvious. It would interfere with Mr Clinton’s object which (however appearances may at some times indicate) depend upon it, is the Presidency at the Next election I have no political ^inter^course with him, but this I know confidently, altho’ I do not wish to be quoted for it.

The most of his friends think his chance a bad one & would prefer that he should give it up. But they cannot persuade him to do or at least will not succeed in doing it, till it is too late to make a successful retreat. When I speak of Noah as the friend of C, I presume I tell you nothing new; an intelligent & constant observer of his movements cannot be in doubt upon that subject. His entanglement with Mr. Clinton, produced by his embarrassments & a belief that our defeat in 1824 was permanent has destroyed his influence at home altogether. Had he frankly stated that he could not oppose Mr. Clinton for any reason, the circumstance would have been overlooked. But the course he has seen fit to adopt has produced a very general impression upon the Republicans of the state, that he has been treacherous to them which it will take a long time to efface; this has been a source of great regret to me, he has some excellent points and I sincerely hope he may get over it. His paper as well as those few others in the state exclusively devoted to him (that not being the case with most of the Old Federal papers) will exhibit for a long time to come the impress of his politics, viz lamentable and extreme variableness. On the part of the Republican presses you will witness a mild but steady and firm tread leading constantly to the great object in view. For myself I am not tenacious whether we have a congressional caucus or a general convention, so that we have either; the latter would remove the embarrassment of those who have or profess to have scruples, as to the former, would be fresher & perhaps more in unison with the spirit of the times, especially at the seat of the war Pensylvania & N. York. The following may, I think, justly be ranked among its probable advantages. First, It is the best and probably the only practicable mode of concentrating the entire vote of the opposition & of effecting what is of still greater importance, the substantial reorganization of the Old Republican Party. 2nd Its first result cannot be doubtful. Mr. Adams occupying the seat and being determined not to surrender it except ‘in extremis’ will not submit his pretension to the convention. Noah’s real or affected apprehensions upon that subject are idle. I have long been satisfied that we can only get rid of the present, & restore a better state of things, by combining Genl. Jacksons personal popularity with the portion of old party feeling yet remaining. This sentiment is spreading, and wou’d of itself be sufficient to nominate him at the Convention. 3rd The call of such a convention, its exclusive Republican character, & the refusal of Mr. Adams and his friends to become parties to it, would draw anew the old Party lines & the subsequent contest would reestablish them; state nomination alone would fall far short of that object.

4th It would greatly improve the condition of the Republicans of the North & Middle States by substituting party principle for personal preference as one of the leading points in the contest. The location of the candidate would in a great degree, be merged in its consideration. Instead of the question being between a northern and Southern man, it would be whether ^or not^ the ties, which have heretofore bound together a great political party should be severed. The difference between the two questions would be found to be immense in the elective field. Altho’ this is a mere party consideration, it is not on that account less likely to be effectual, considerations of this character not infrequently operate as efficiently as those which bear upon the most important questions of constitutional doctrine. Indeed Genl Jackson has been so little in public life, that it will be not a little difficult to contrast his opinions on great questions with those of Mr. Adams. His letter to Mr. Monroe operates agt him in N York by placing him in one respect on the same footing with the present incumbent. Hence the importance, if not, necessity of collateral matter to secure him a support there.

5thly, It would place our Republican friends in New England on new and strong grounds. They would have to decide between an indulgence in sectional & personal feelings with an entire separation from their old political friends, on the one hand or acquiescence in the fairly expressed will of the party, on the other. In all the states the divisions between Republicans and Federalists is still kept up & cannot be laid aside whatever the leaders of the two parties may desire. Such a question would greatly disturb the democracy of the east. N. Hampshire I think it would give us the east victory; in all New England it would give them trouble, keep them employ’d at home & check the hopes of their friends elsewhere.

6th Its effects would be highly salutary on your section of the union by the revival of old party distinctions. We must always have party distinctions and the old ones are the best of which the nature of the case admits. Political combinations between the inhabitants of the different states are unavoidable & the most natural & beneficial to the country is that between the planters of the South and the plain Republicans of the north. The country has once flourished under a party thus constituted & may again. It would take longer than our lives (even if it were practicable) to create new party feelings to keep those masses together. If the old ones are suppressed, Geographical divisions founded on local interests or, what is worse prejudices between free & slave holding states will inevitably take their place. Party attachment in former times furnished a complete antidote for sectional prejudices by producing counteracting feelings. It was not until that defence had been broken down that the clamour agt Southern Influence and African Slavery could be made effectual in the North. Those in the South who assisted in producing the change are, I am satisfied, now deeply sensible of their errour. Every honest Federalist of the South therefore should (and would if he duly reflected upon the subject) prefer the revival of old party feelings to any other state of things he has a right to expect. Formerly, attacks upon Southern Republicans were regarded by those of the north as assaults upon their political brethren & resented accordingly. This all powerful sympathy has been much weakened, if not, destroyed by the amalgamating policy of Mr. Monroe. It can & ought to be revived and the proposed convention would be eminently serviceable in effecting that object. The failure of the last caucus furnishes no argument agt a convention nor would it against another caucus. The condition of things is essentially different. Then the South was divided, now it is united. Then we had several parties now we have in substance but two & for many other reasons. Lastly, the effect of such an nomination on Genl Jackson could not fail to be considerable. His election, as the result of his military services without reference to party & so far as he alone is concerned, scarcely to principle, is ^would be^ one thing. His election as the result of a combined and concerted effort of a political party, holding in the main, to certain tenets & opposed to certain prevailing principles, might be another and a far different thing.

But I forbear, I have already spun out this letter to an unconscionable length. The little acquaintance I have with you scarcely justifies me in making this communication. But I write to you in strict confidence-a confidence inspired altogether by your public course. You will not be so unjust as to suspect me of the small design of wishing only to be civil, when I say that there is not another man in the union can render as much service to the cause in which we are engaged as yourself. The lamentable state of the press, must have occurred to you more frequently than to myself. If I were to ask you to name me another editor ^who^ fully understands & duly appreciates the importance of the great principles we contend for, without the establishment of which our success would dwindle into insignificance. Where would you find him: & yet the press is the great lever by which all great movements in the political world must be sustained. Let me then repeat my request, that you will bestow upon this point all the attention you can afford. If it is successfully carried through, there is no limit to the advantages that would result from it. The principal opposition is to be apprehended from the friends of Genl Jackson’s erroneously supposing that there is no danger of the nomination’s falling upon another. This can & must be obviated.

Copy of a letter 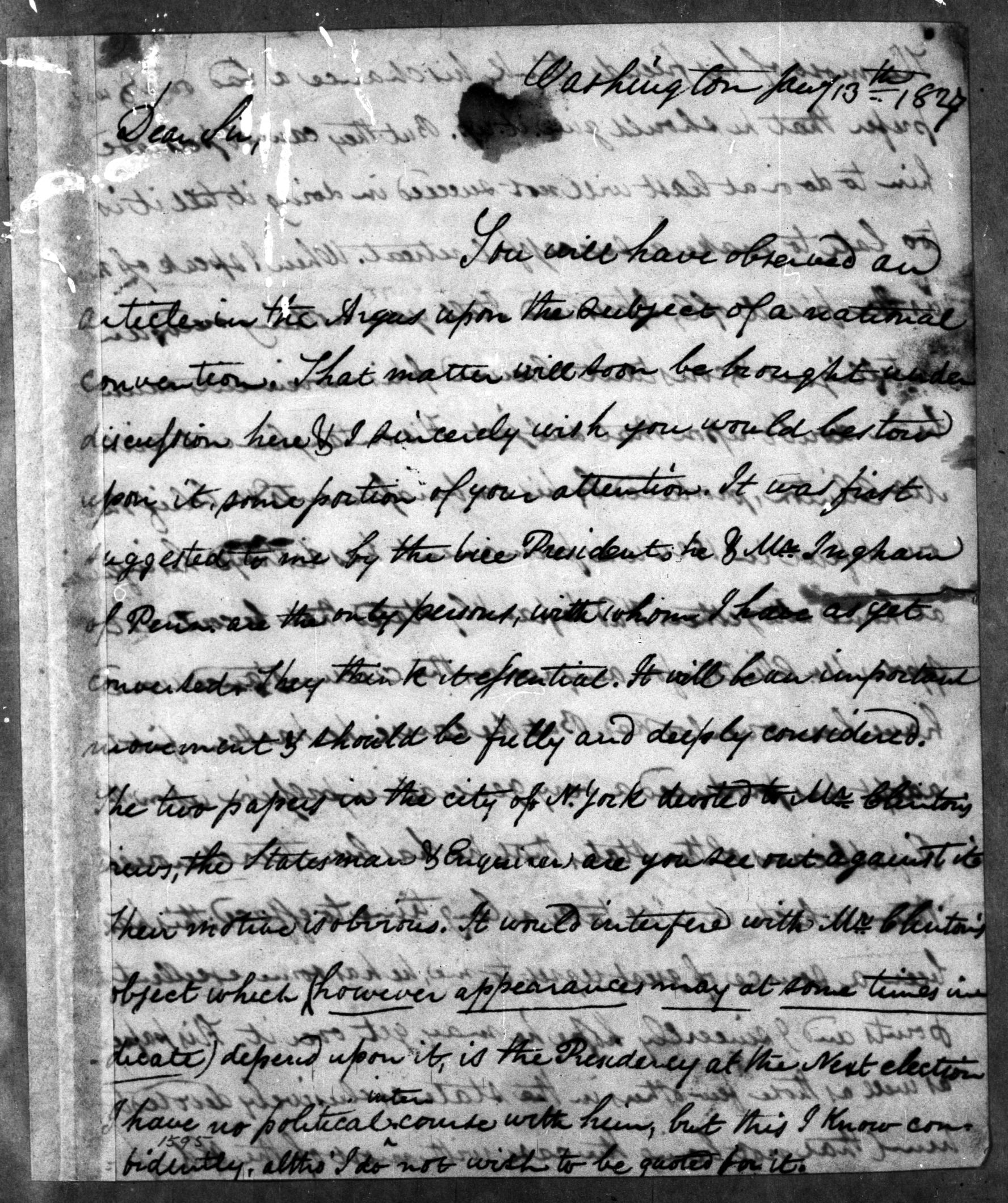 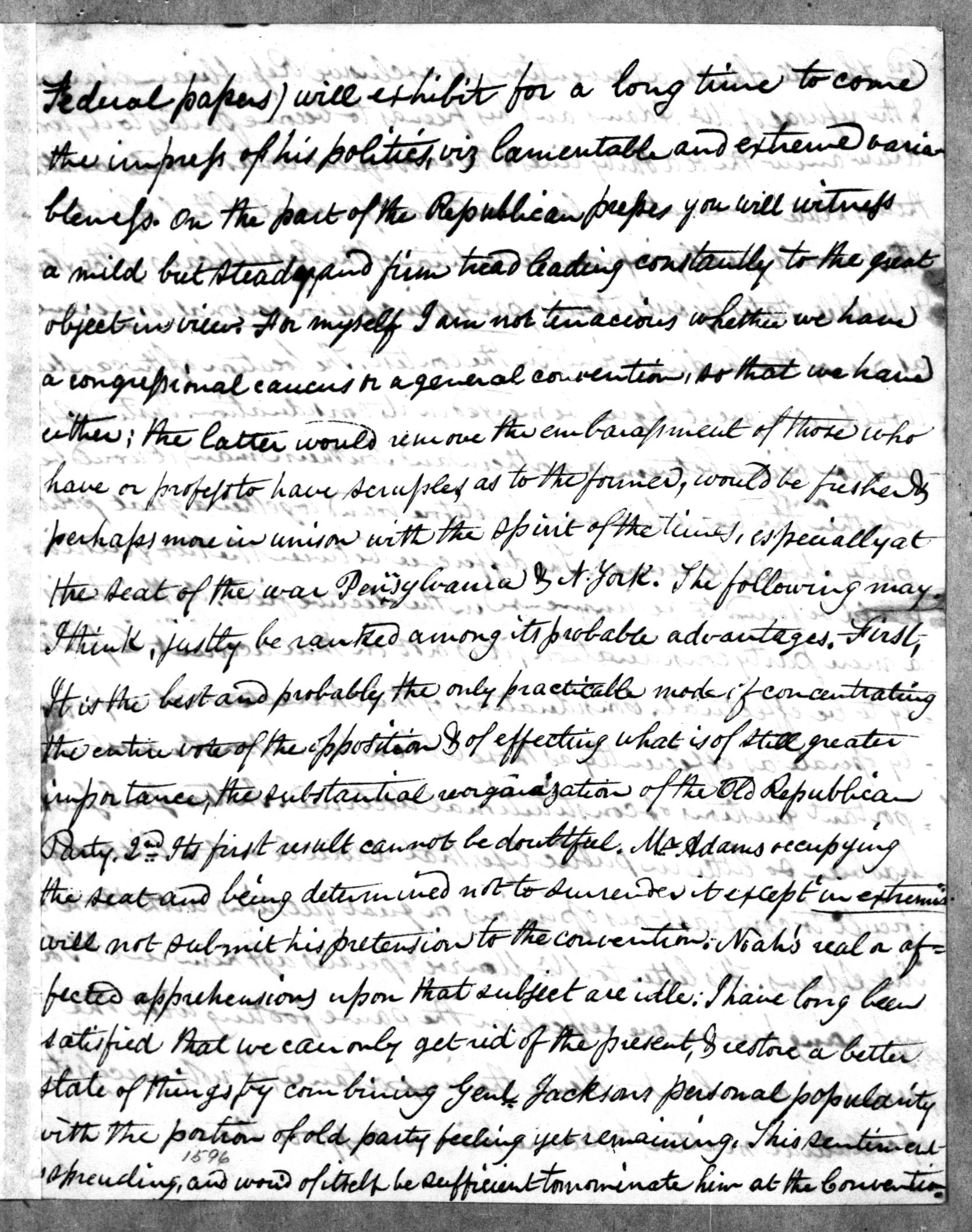 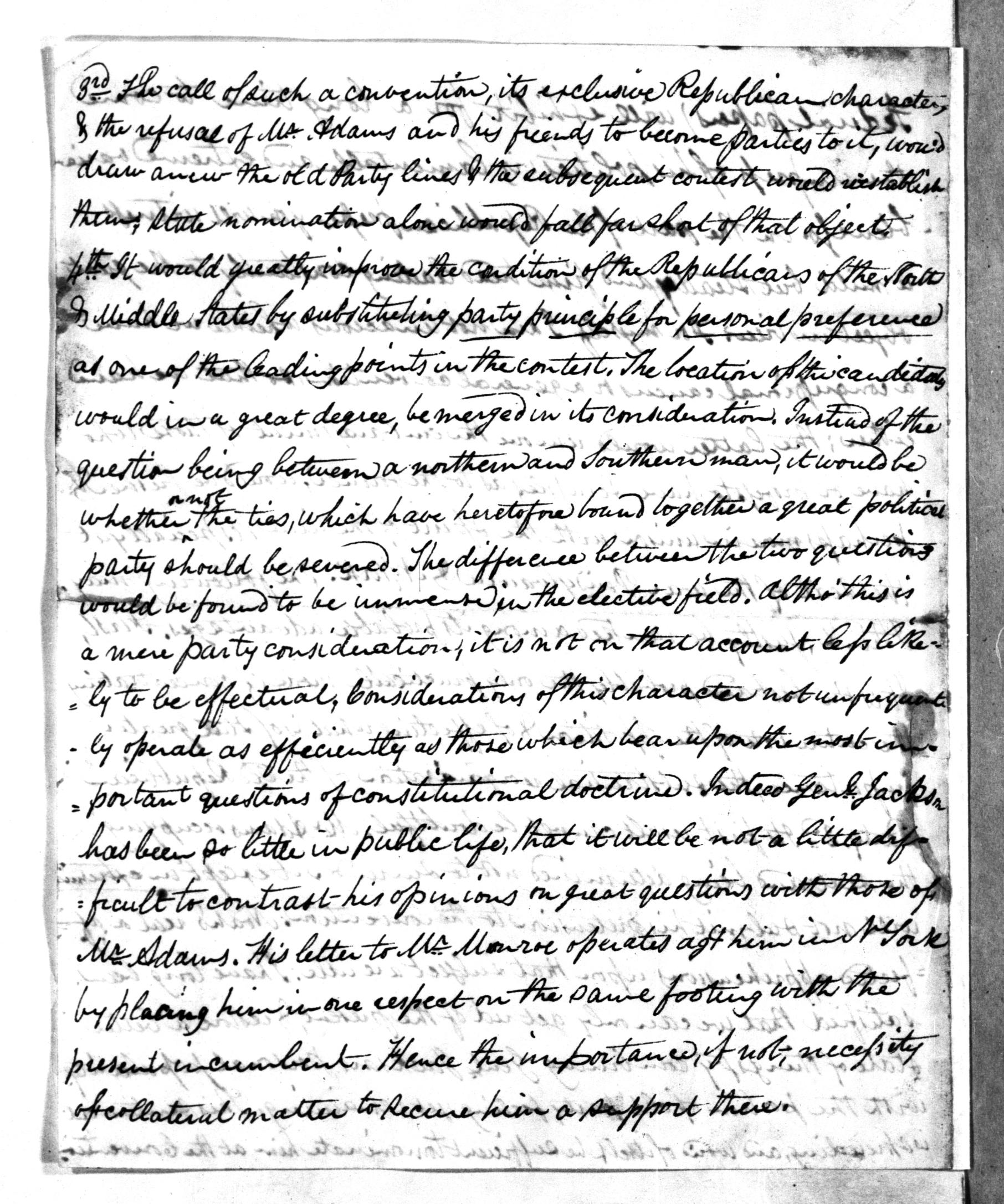 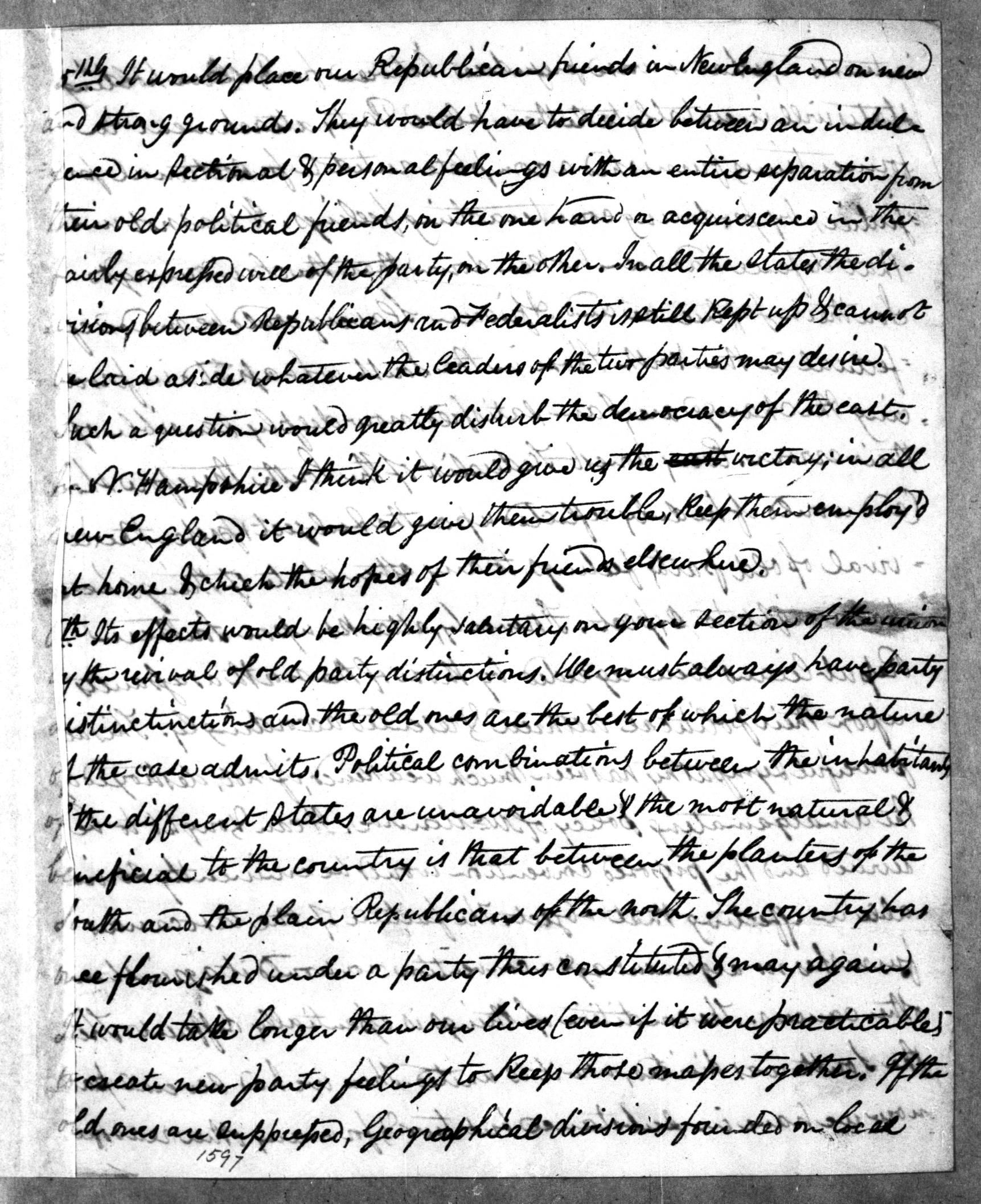 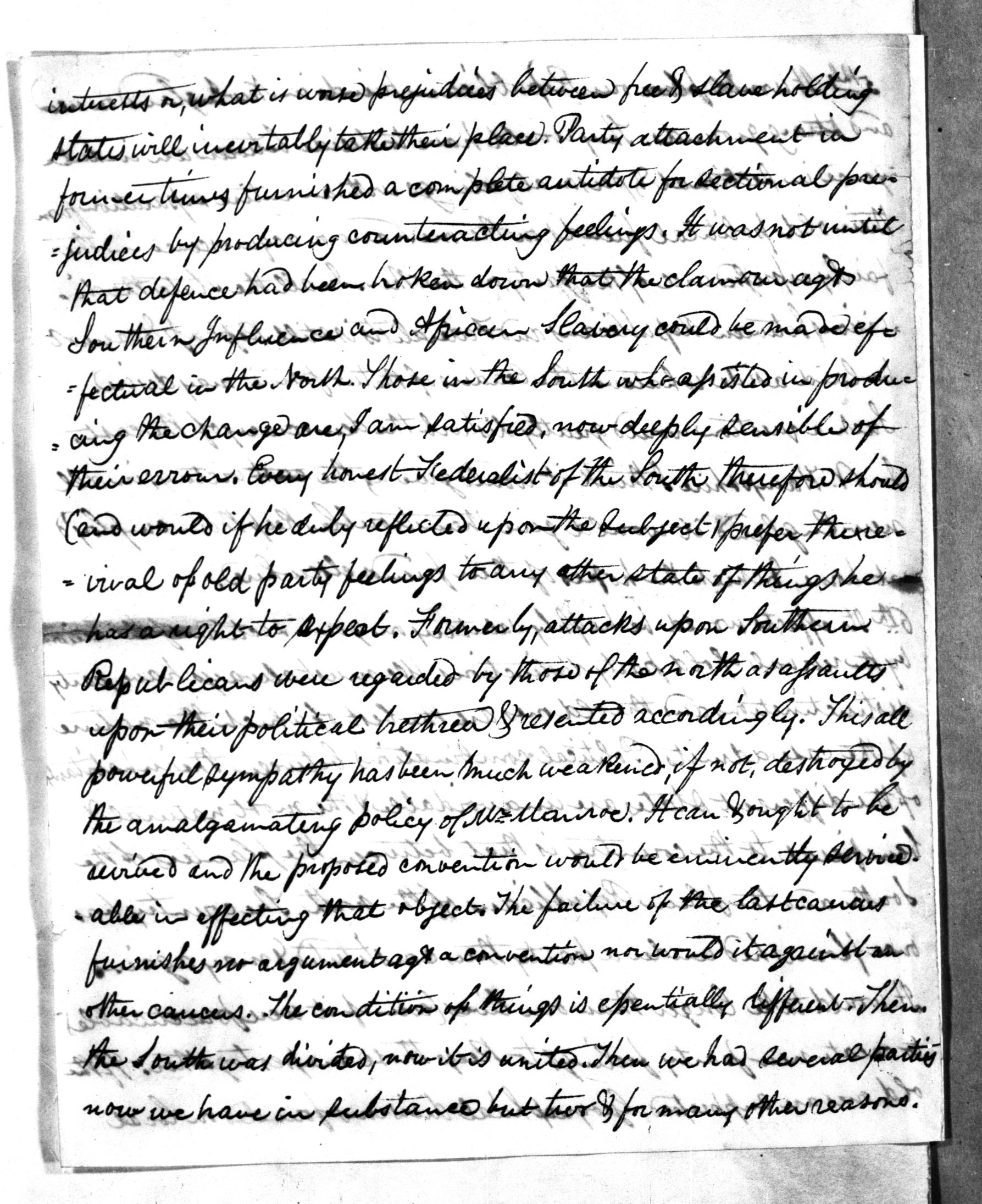 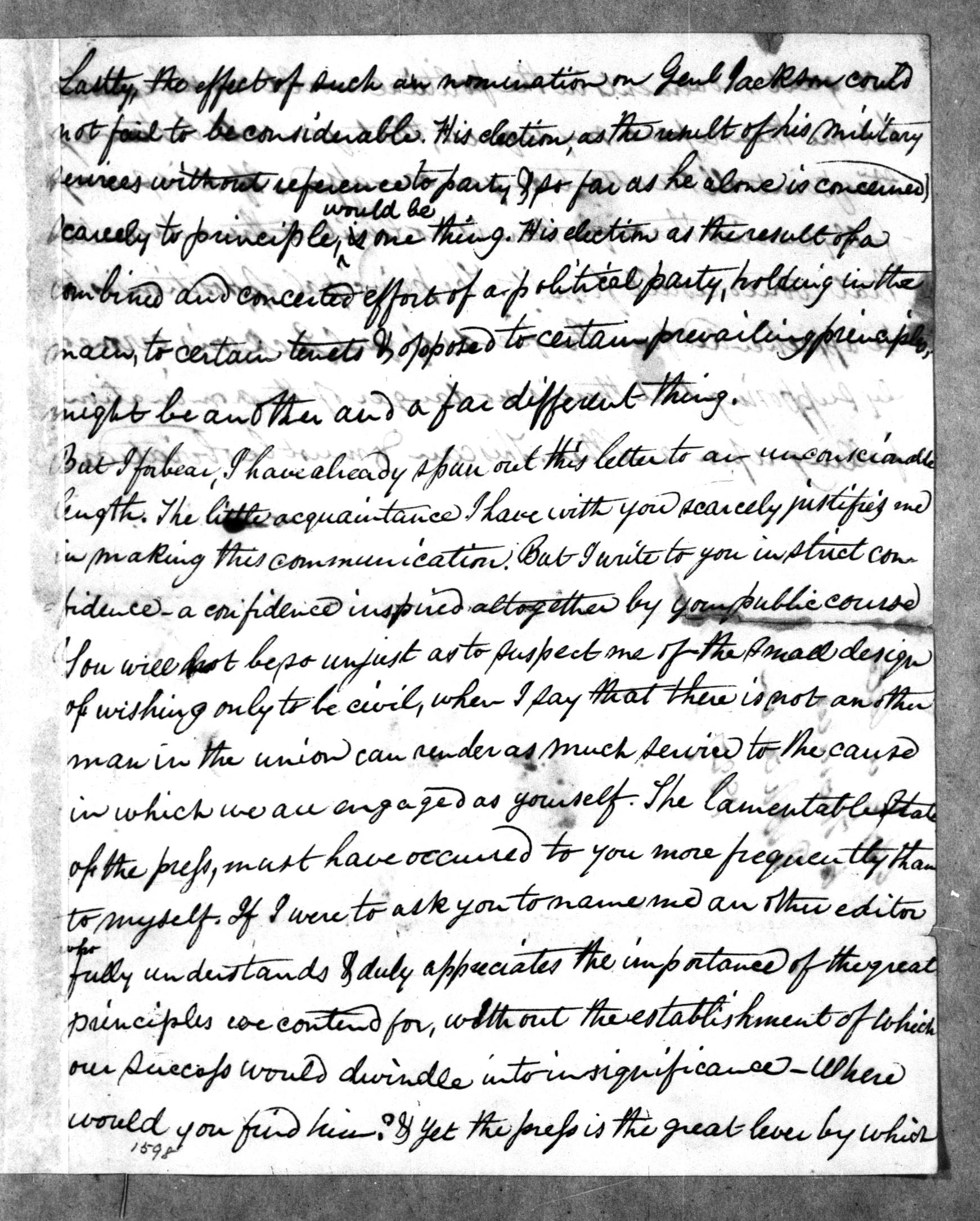 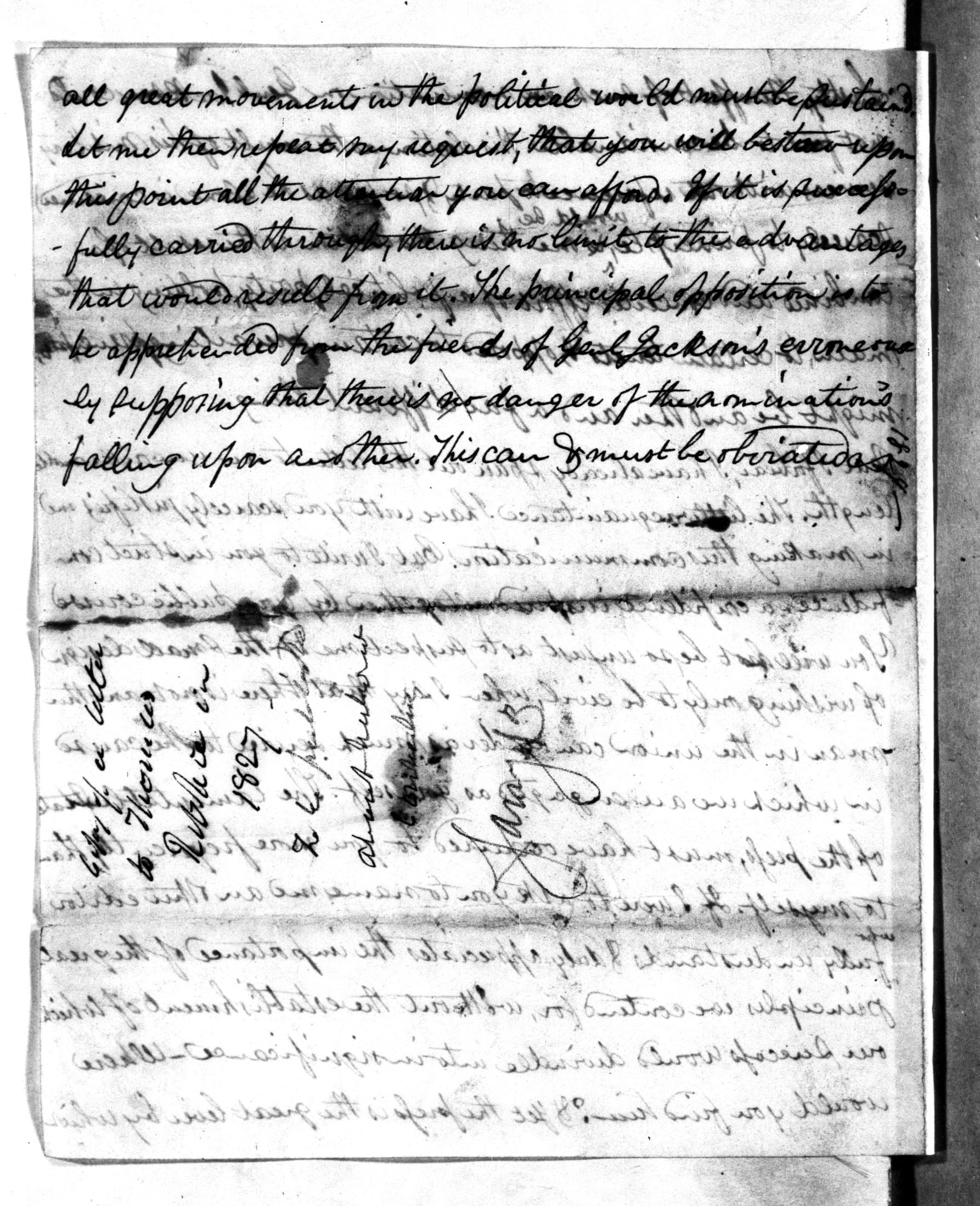 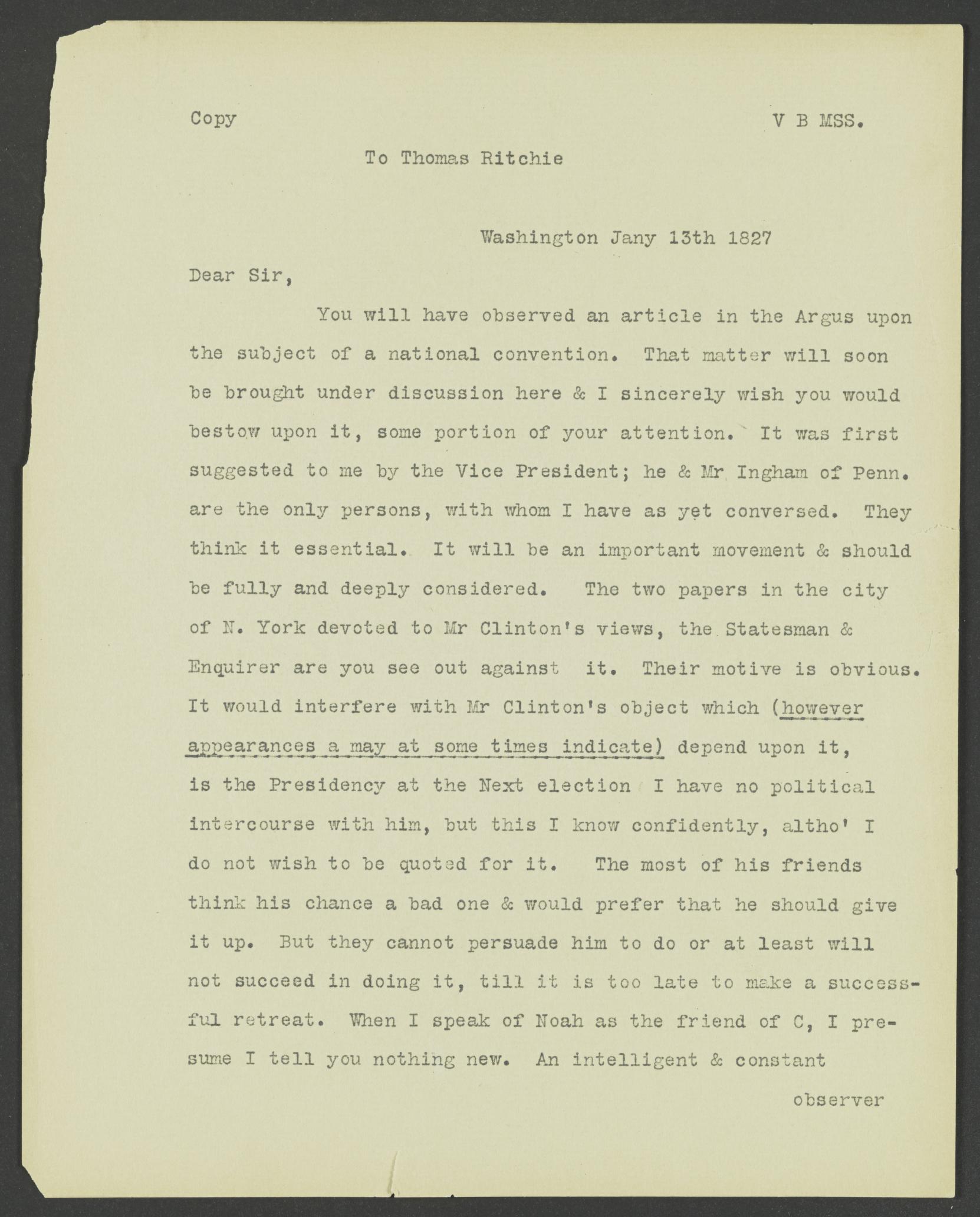 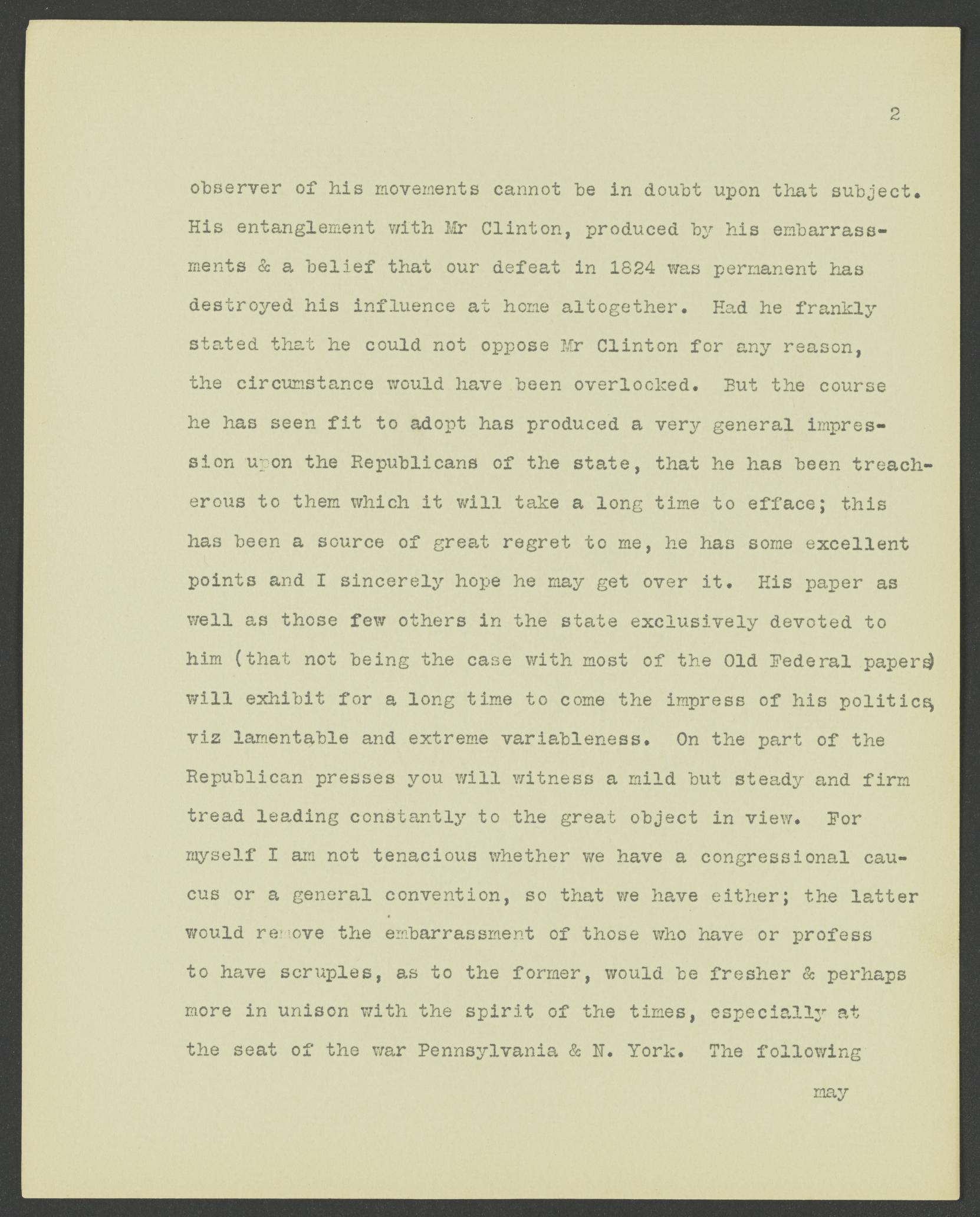 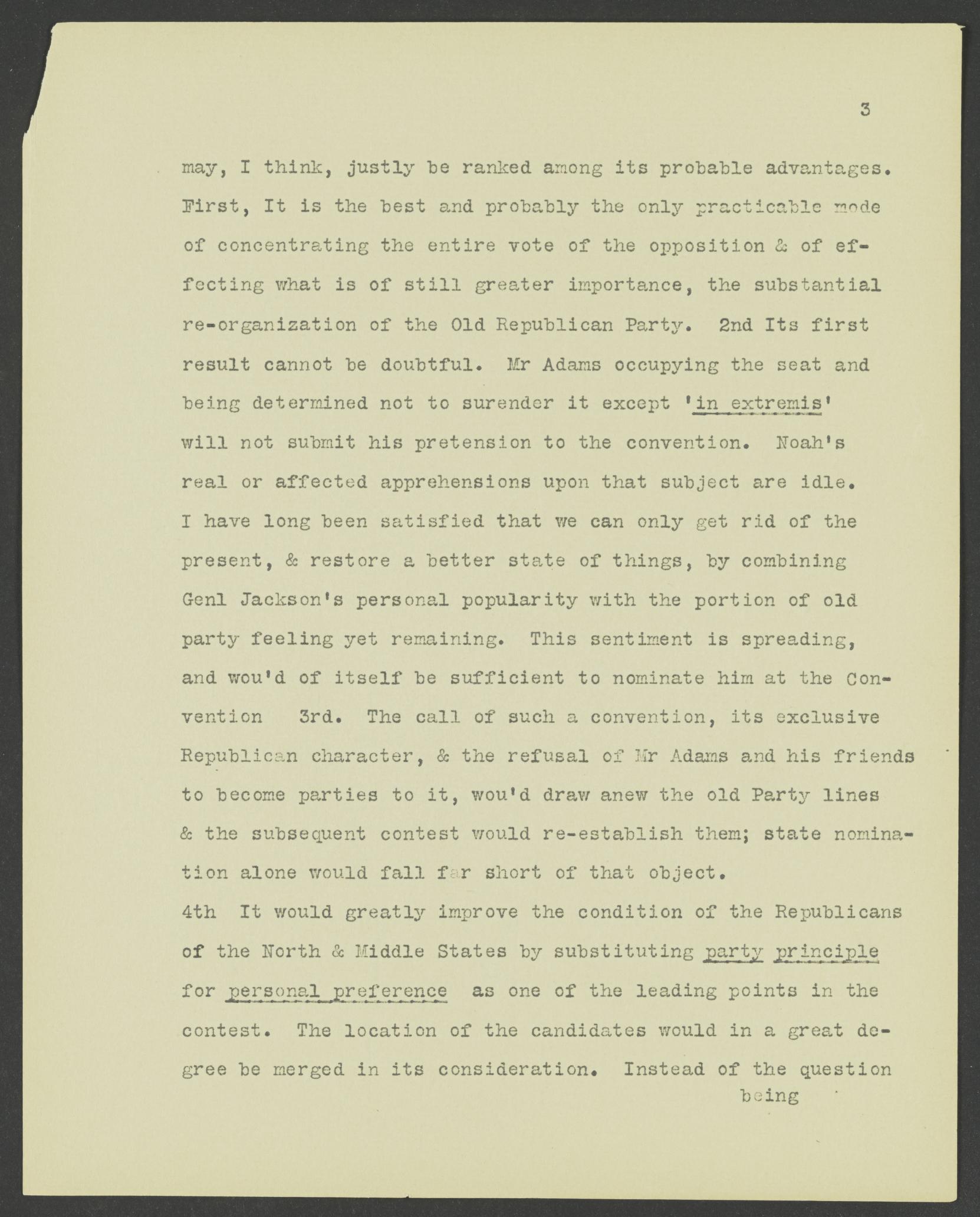 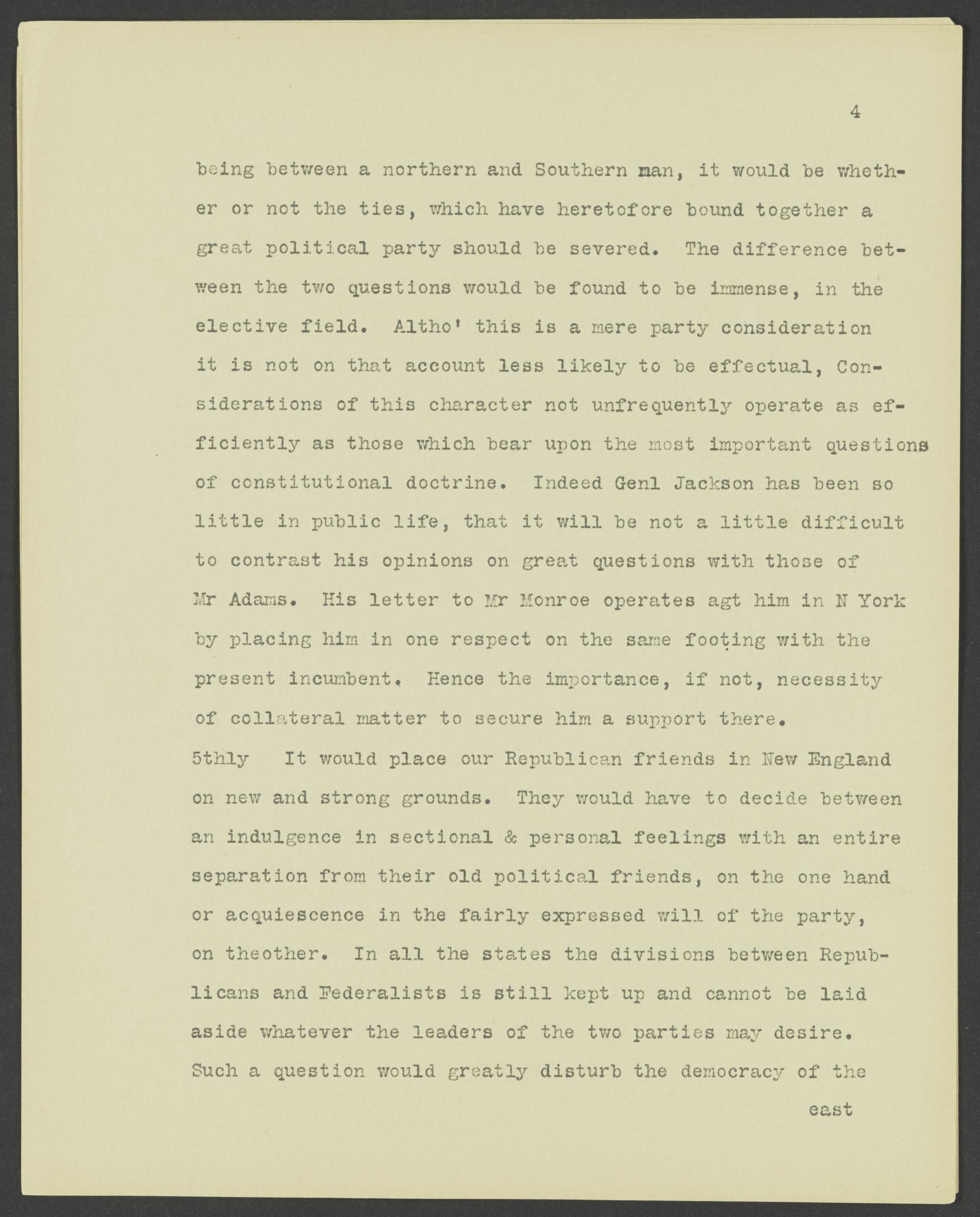 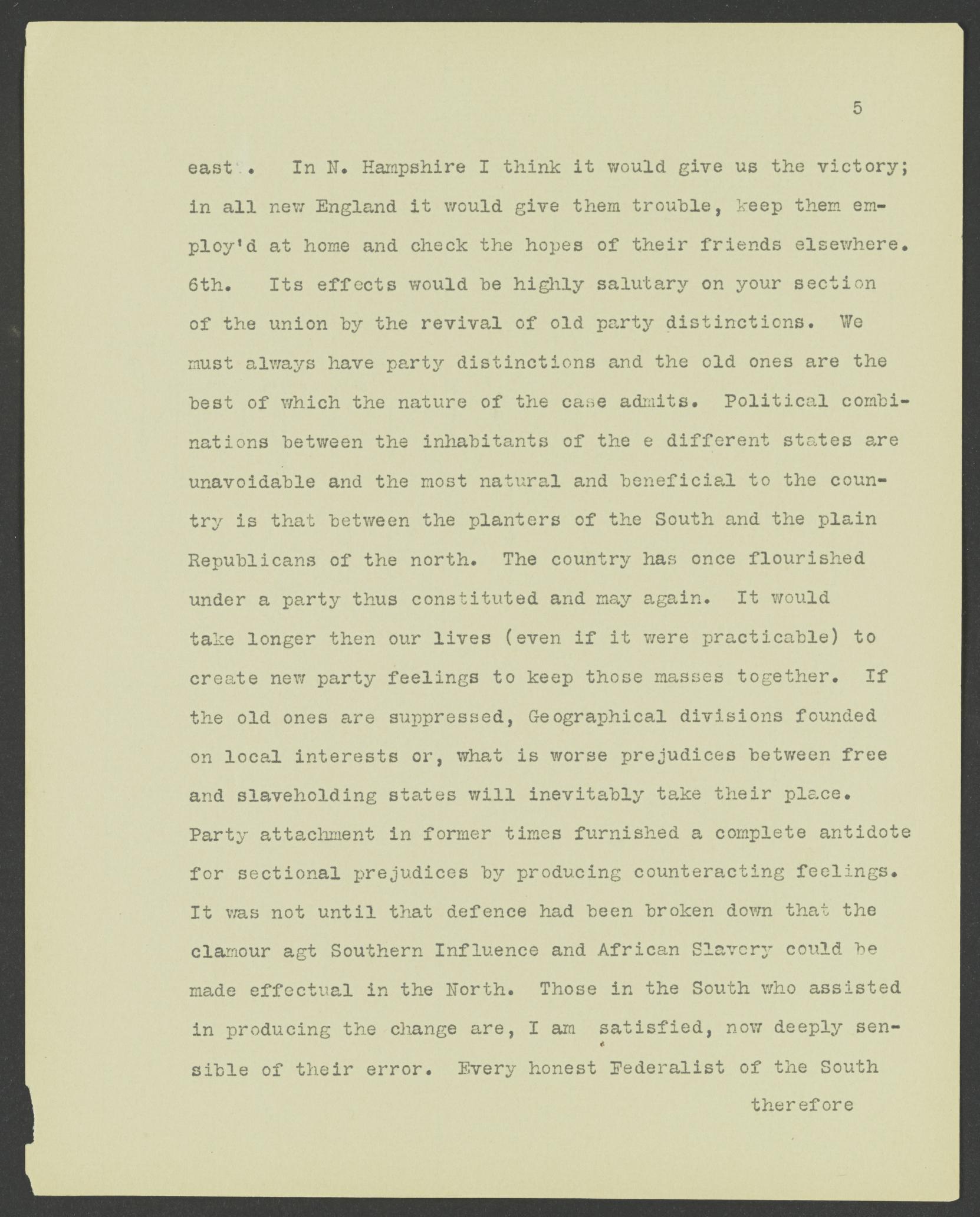 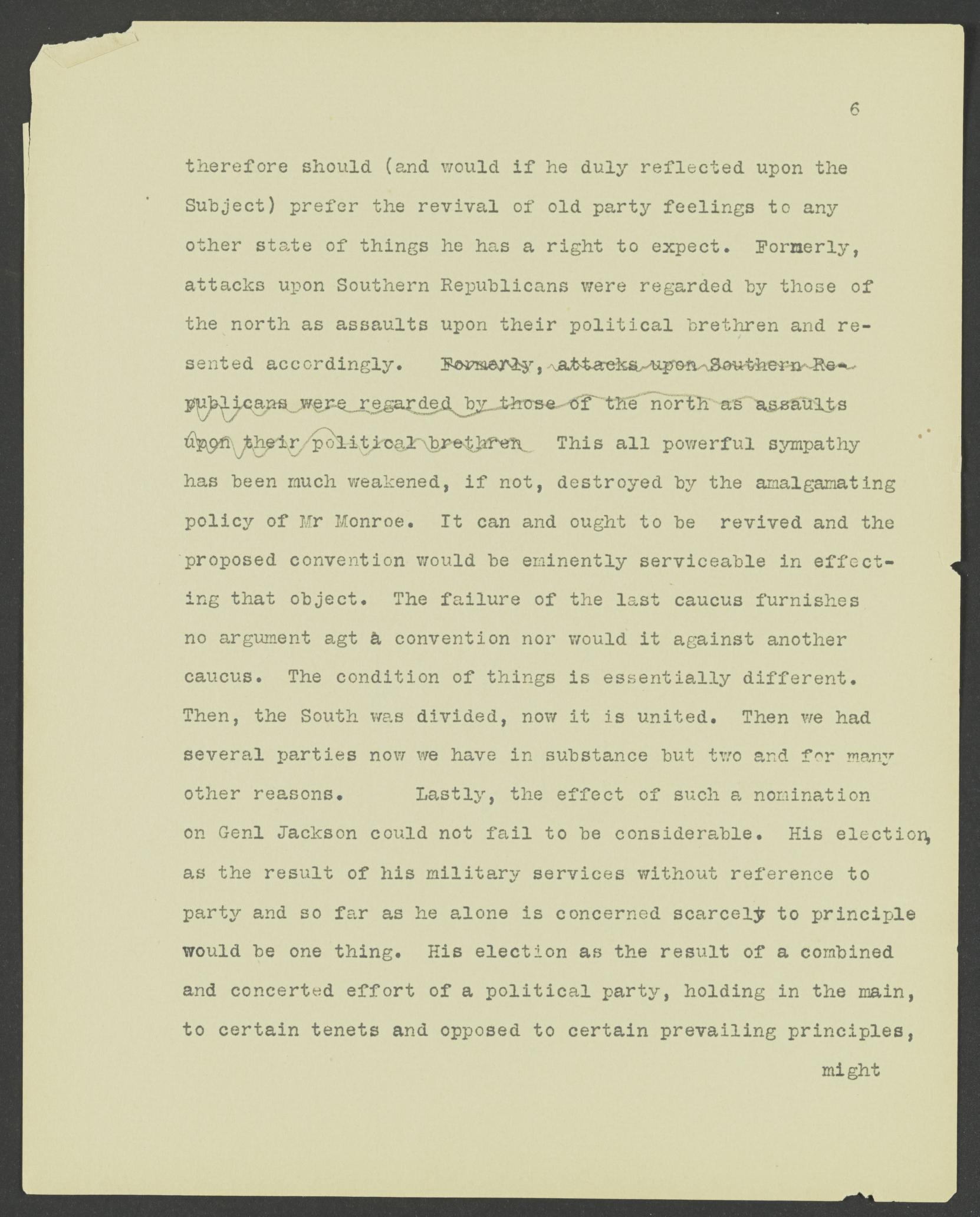 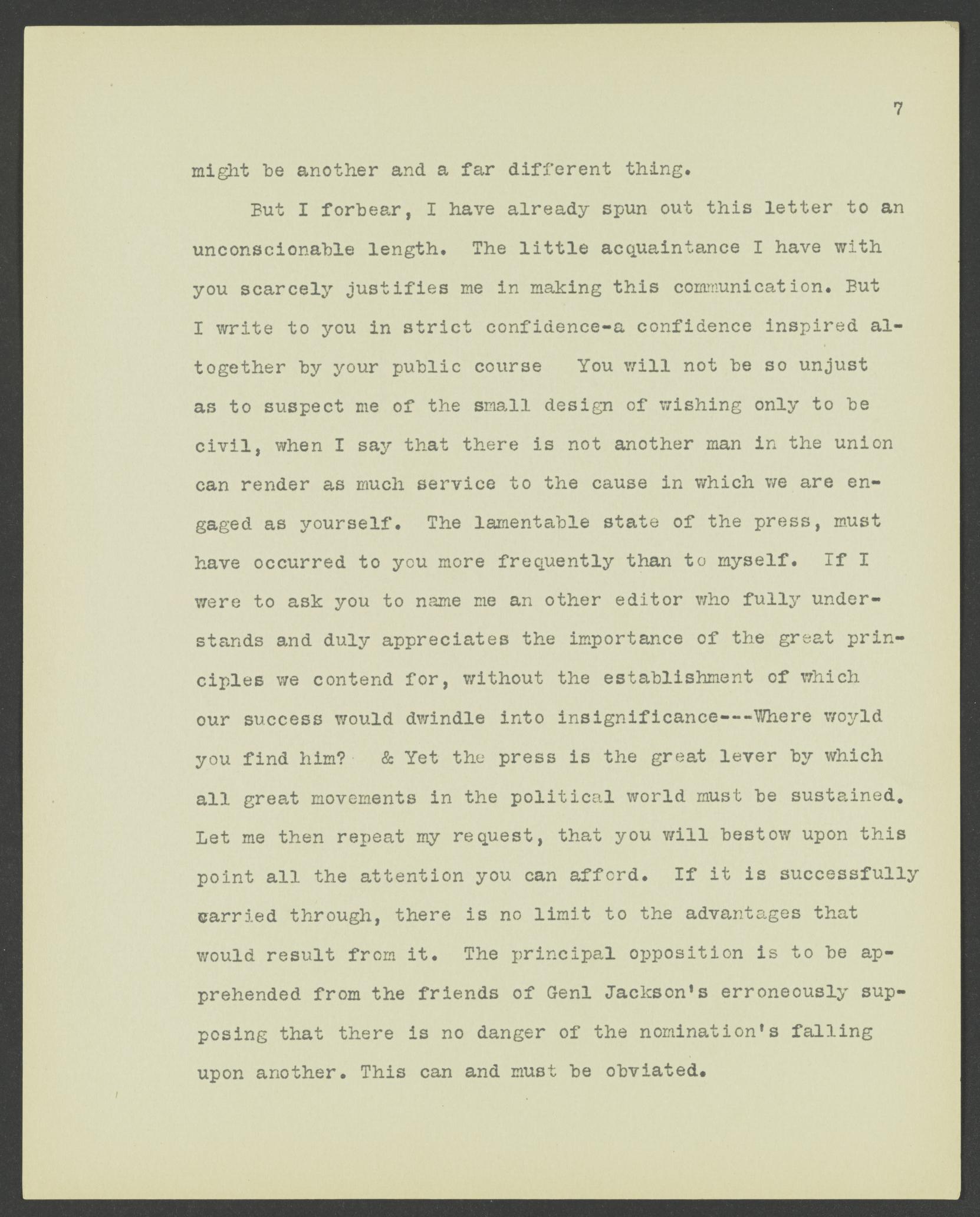