I am almost ashamed to write you after so long neglecting it, but if ever a poor devil had excuses good & numerous it is me. Untill three or four weeks since I have laboured with holy zeal, and almost more than human Industry to rid this devoted State of a Junta which sit like the night mare upon her & which is loathed & despised by all whose good opinion is worth having except the Western Bards. We have scotched the snake not killed it. One more campaign & all will be well. We had not sufficient time to carry the light into our Western Wilds where although they we were not annoyed by poets we were very much so by a rascally set of prosers, who deceived the good people to their undoing. Since the election I have been jaunting to the south & spent a few days at Philidelphia, was there when the Cashier for Newyork was chosen. It is unnecessary to say that it would have given me great pleasure to have assisted you in that affair but that I found impracticable. You must be patient, good humoured & indulgent with the mother Bank as to all they have or may think proper to do to ease their minds as to their Western debts & in the end you & Mr Cheves will be good friends & usefull to each other. Although I went there prejudiced agt. him on your account I left him with strong partialities in his favour. We stayed a day more to dine with him & were treated by him with great kindness, he may not be a good banker of that I know nothing & care less but I am egregiously deceived if he is not a clever fellow. I wish I could say something favourable of your efforts here but I cant you must have patience & do as well as you can. At present nothing can be done with them I had intended to have left here for Newyork this fall, in the event of the War being ended, but as it is, my desire to serve your dear friend the great Clinton will keep me here a few years longer. I have not the remotest objection that you should stick to him Van Ness, Spencer, Thomas, Parkers son John, Granger, the Jenkins and all the others, but for gods sake give us no more puffing in verse, I assure you solemnly that it will no longer pass current here, that Mr. Clinton owes his election to a community of various interests hopes & fears is well known & that he is in no sense the favourite of this State is as certain as it is true that he does not deserve to be, but I will vex you no more. Give my best respects to Mrs Worth & believe me to be one of your best friends, one who is fully sensible how often just & generous minds are caught in toils which they woul[d] detect & disperse if their judgments were not prevented by their feelings.

[Located at the bottom of page 3]: #A plausible puppy—nothing more. 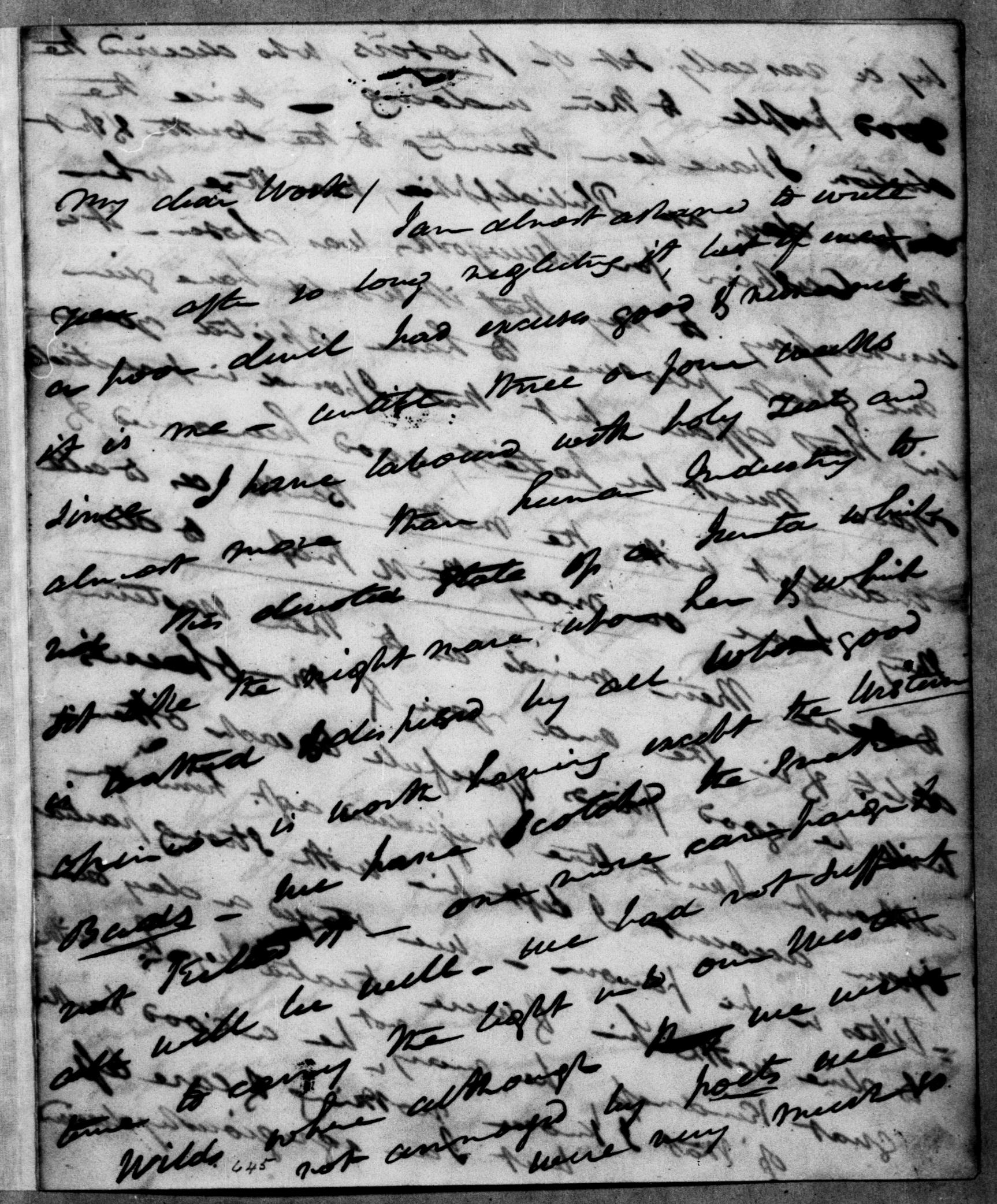 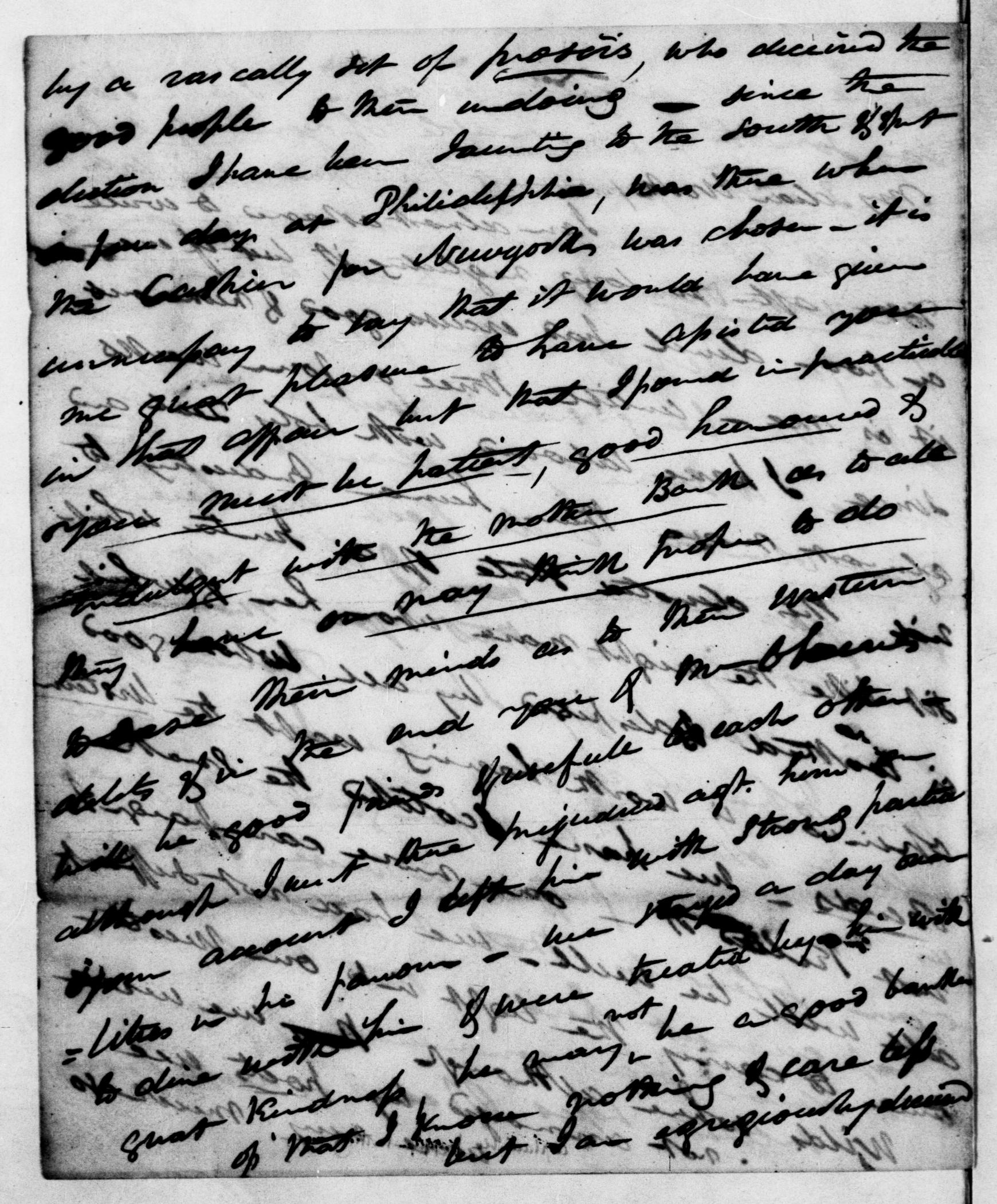 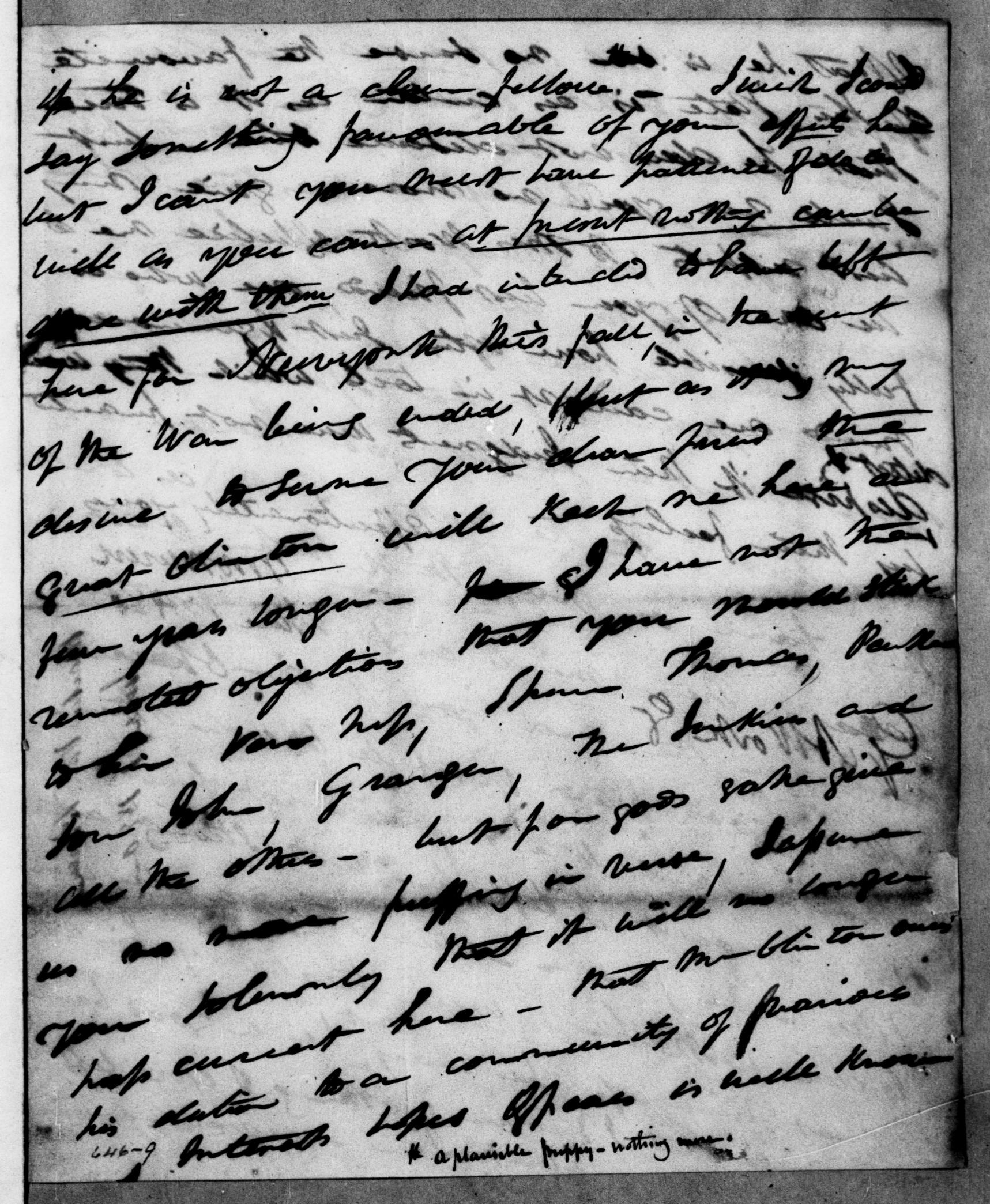 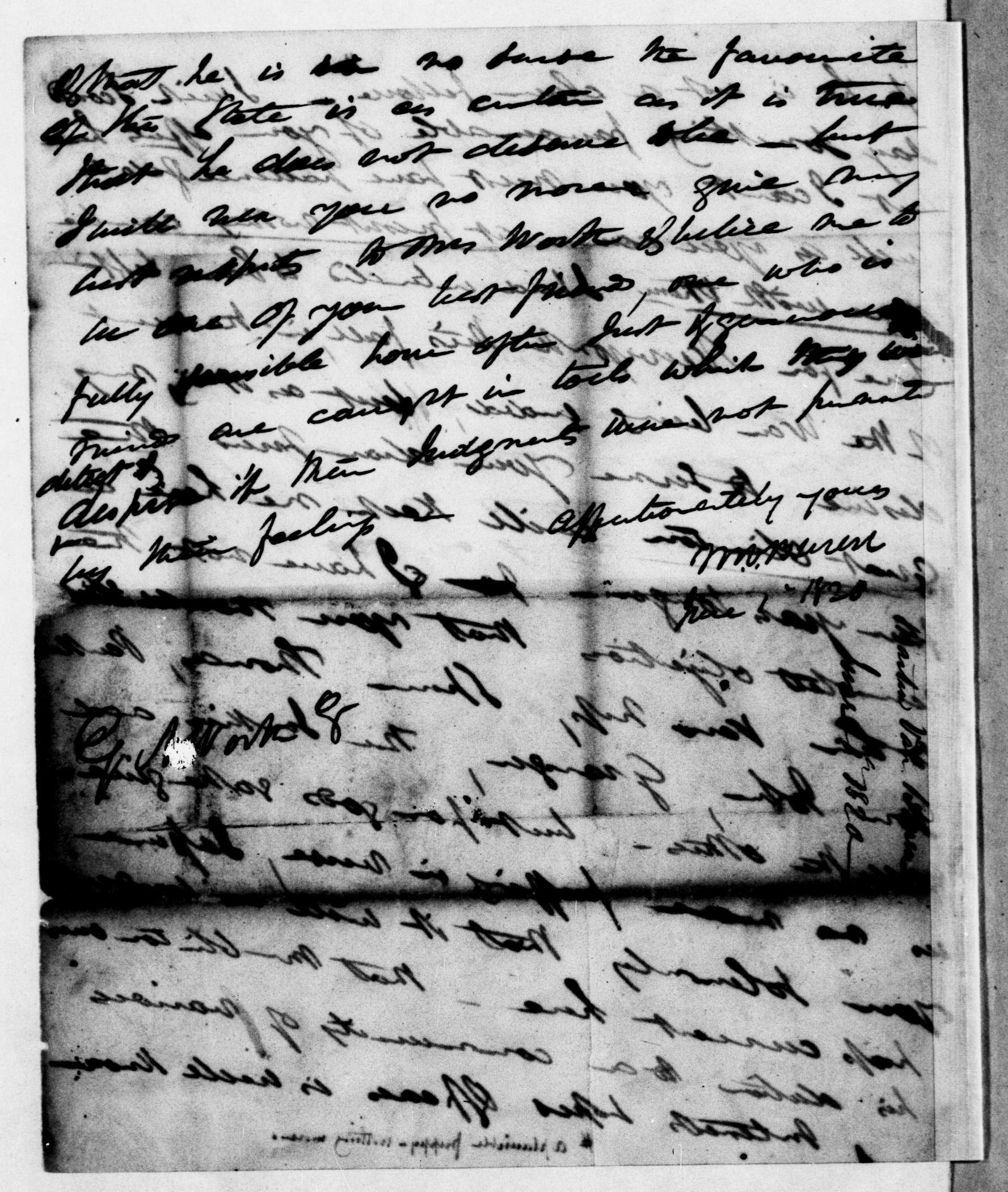 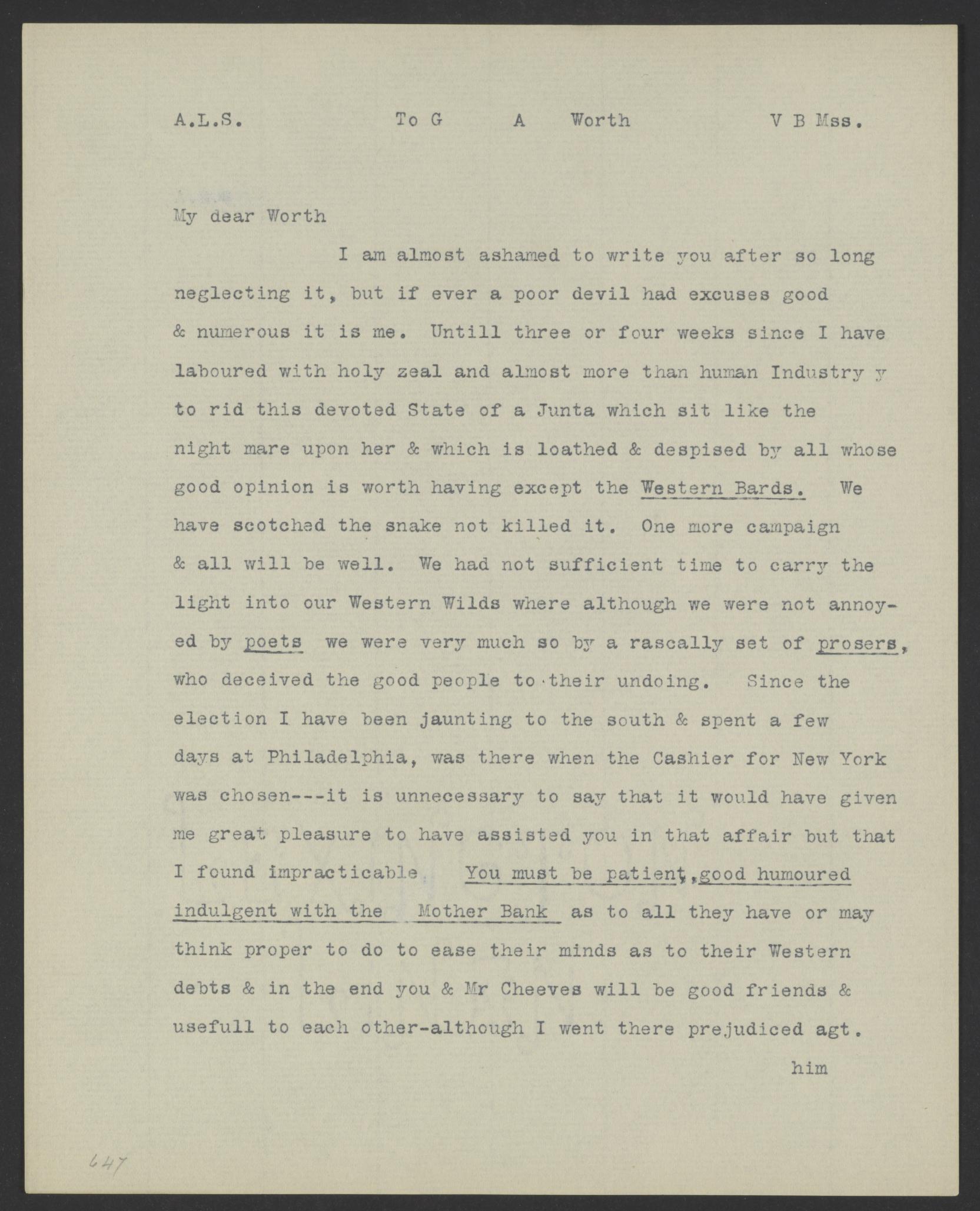 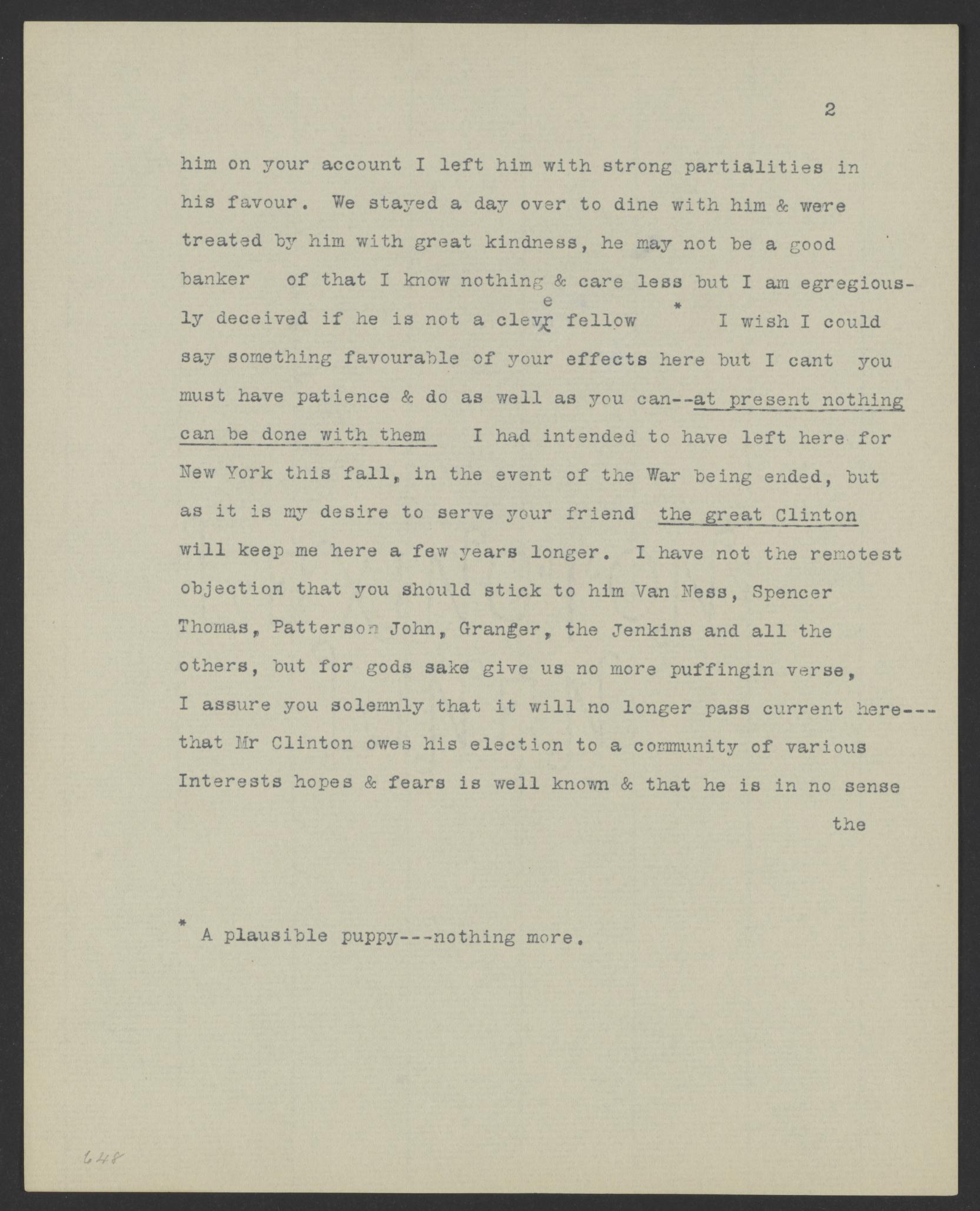 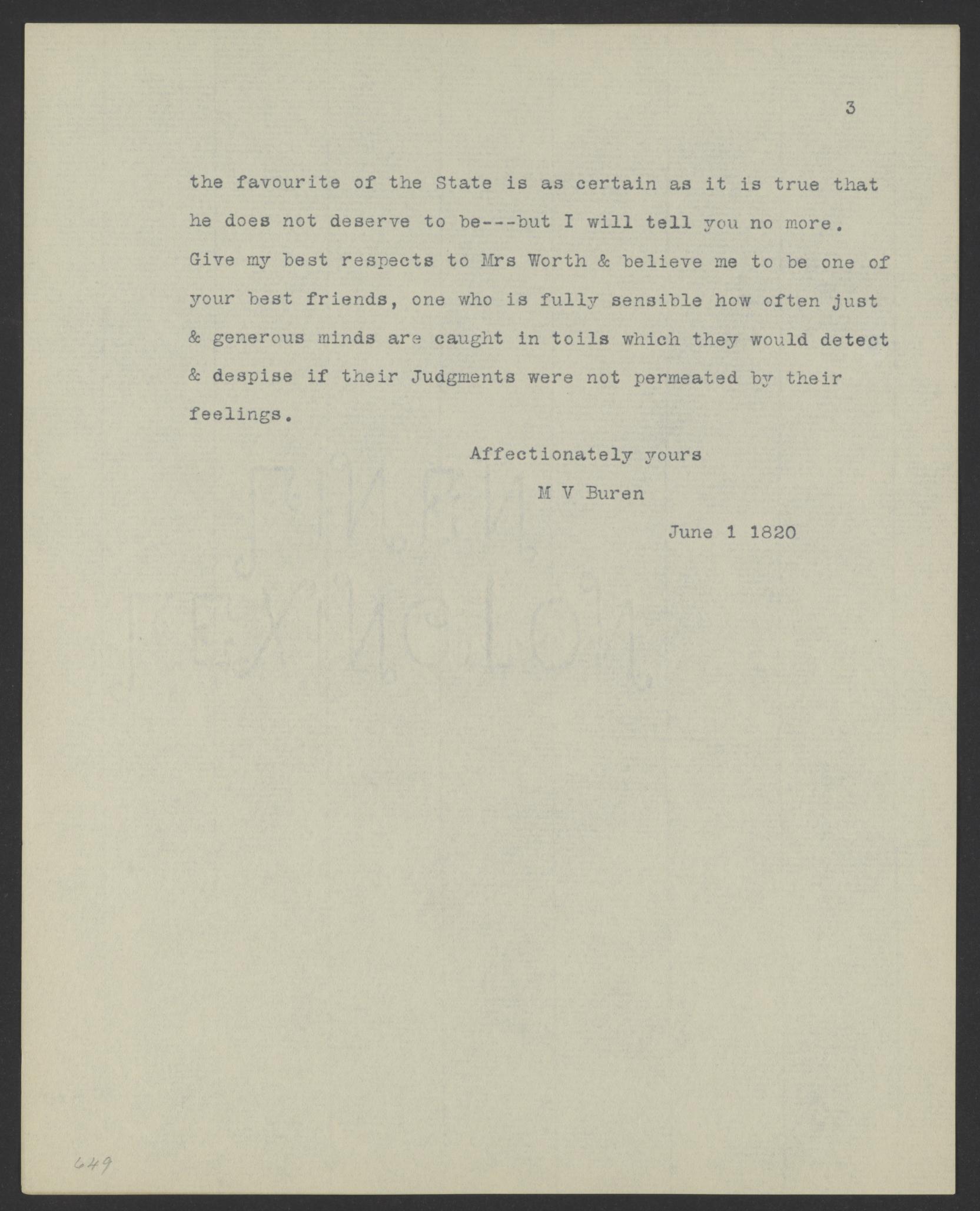