Your last epistle to on the subject of Newyork politics has only served to add demonstration to my former convictions that you are totally and deplorably Ignorant not only of Mr Clinton (In true Clintonian style I name him first & also out of complaisance to you) but of the State her political Interests and the Sentiments and views of her Citizens. When you meddle with politics you are as I have always told you totally out of your element ^that however intelligent you are on all other subjects on that "you do not know a hawk from a handsaw" even "when the wind is southerly"^. This blunt sincerity may not flatter your vanity but that I ^am^ not bound to you ^do^ you good alone is what I wish to promote. A man to be a sound politician and in any degree usefull to his country must be governed by higher & steadyer considerations than those of personal sympathy and private regard. I will not suffer your unmerited censures nor the kind reproaches of your “Intelligent men from all quarters” who have so kindly taken our political Interests into their secure keeping to drive me to say of Mr. Clinton what his political demerit would abundantly Justify. His fallen & falling fortunes are calculated to excite other feelings than those of reproach an or exultation & that man can have known nothing of me or my views who could for a moment suppose that in the opposition which duty has compelled me to make to him, I have been actuated by a single inducement of a personal nature or that I ever ceased to regret that his political Infidelity had lead & was leading to the prostration of his personal weight and Influence in the State. Had I the least Idea that you was serious in your declaratory remarks upon this subject I would sorely regret that I had been so much misunderstood by a friend who I so dearly love & for whose good opinion I have always entertained so high a regard.

In the name of all that is decent where is the evidence of that towering mind and those superior talents which It has been the business of myriads of puffers & toad-eaters to attribute to him & who by their never ending hallelujahs to his “Stupenduous greatness,” have nauseated the public taste & stunned the public ear. He has spent the best part of half a century in the acquisition of general knowledge and the improvement of his mind without ^uninterrupted by^ the necessity ^of^ attending to private business & I ask again where is the evidence of those talents, for opposition to which we are to be burnt as heretics or denounced as Jacobins by “People of Information from every part of the union" who congregate at Cincinnati”—by men who utterly Ignorant of the State and its political interests and wholly destitute of the means necessary to a correct Judgment have the presumption to accompany their volunteer opinions with reproach on the conduct of men whose sole object is the Interest and honor of the State and who can proudly say that “they have done her some service & that she knows it.”

That Mr C. is a man of ordinary strength of mind, of considerable acquirements and that he writes very well is cheerfully admitted. All beyond is gratuitous assumption & nothing else. When has Mr Clinton in times of peril stood forward in the Senate & by the powers of Eloquence or even argument sustained the Interests of his country and hushed the clamours of faction—never. But you may say that is not his part that every man cannot be an orator, when has he originated and carryed through any measure of Interest to his Country, which required penetration, industry, fortitude talents & perseverance, say you—but be carefull what you say of the canal. When has Mr. Clinton when beset with difficulties shewn that presence of mind, that fertility of Invention, that fortitude in suffering & that vigour and perseverance in combatting & removing difficulties which are invariably the indicia of a great mind—never[.] On the contrary recently, when danger pressed and the storm of public indignation was howling about him, when a great man of correct views could not have consented for any earthly object to stoop to his political enemies, still less to receive ^a^ favour at the hands of him who had contributed most to his over throw—at such a time and under such circumstances he “ere he arrived at the point proposed” he was heard to cry “help me cassius or I sink” and when the fever of apprehension was on him to exclaim “Titinius give me some drink like a sick girl.” Not only this but he consented to be supported by Judge Spencer who had persecuted him & ^to be^ by him held up to the people as a penitent, thus stooping to kiss the rod which had chastised him. Was this a course deserving the approbation of my spirited high minded & honororable friend G. A. Worth Esqre? Was it for this pious humility, ^in^ seeking to be exalted by humbling himself that he became the object of Mr Worths Idolatry?

If in these things he has not shewn the great man in what has he? I have always understood that under all goverments the strongest evidence of a capable & good chief was to be found in the peace & harmony of his subjects. Mr. Clinton has not yet been Govr. two years and our state is distracted and our council disturbed to an extent beyond all precedent, speak not of the tamany men, they are but a drop in the waters of bitterness. The whole state is in motion, from Buffalo to Montauk point & from the St. Lawrence to the At^l^antic, one continued sentiment & expression of deep-rooted & settled discontent is felt & heard. Nor is this confined to the democratic party, ^by far^ the most respectable if not the most numerous of the federal party openly express their contempt for an administration which has disappointed the hopes of all. How do you account for this? Mr. Clinton came into the administration at the a most auspicious period—admit that there was a violent party against him in the City of Newyork. Good conduct and the exercise of only a small portion of his great talents would have put that opposition to shame and drawn upon them the execration of the community as the causeless disturbers of the public peace & general harmony, has it been so, no, but on the contrary as I have before stated, every section of the State is filled with reproachs & complaints, his influence is utterly destroyed & his re-election put out of the question. Can all this be and yet Mr Clinton be that sound patriot and great man you would make him to be, or are the people of this State, that people who sustained the general goverment in the late War—those patriotic Citizens who never shrunk in the hour of peril, who submitted to all manner of privations for their countries good, who with their characteristic magnanimity in an evil hour consented to blot out a volume of errors & to select as their ruler a man who had so lately forfeited their confidence, are such a people I ask rather than question Mr Clintons talents or patriotism to be stigmatized by the “Intelligent men from all quarters who visit Cincinnati” as a lawless race of disorganizers and unprincipled Jacobins? I think not. I highly value the tender solicitude of your Citizens for our Welfare, but I think they carry it a little too far.

I have always supposed that another distinguishing trait in a good administration is, that it rallys round the govermentale standard, the good the virtuous and the capable now it is a fact too palpable to be denyed and which is virtually admitted by yourself that so far from that being the case with us, there is not an Instance on record in which any administration has embodyed in its support so great a number of dissolute abandoned & broken down politicians as that with which according to you we are blessed withal. But I have done, it is not a pleasant subject to me. I have already violated the resolution with which I commenced ^to answer^ your very frank letter—and will therefore close by assuring you that foolish, wicked & deluded as you and your “intelligent men” may suppose us to be we have resolved, irrevocably resolved, to drive from ^power^ the present state administration & all its supporters aiders & abettors & that that resolution will be carryed into complete effect as certain as fate—that whatever strangers may wish or suggest we value too highly the Interest & honor of a state of which we are Justly proud to be citizens, to sacrafice them to courtesy sympathy or any such feeling. We now have for the first time in ten years all our enemies in front and we will give them such an ^complete^ overthrow & after that pursue a course, that will give to Newyork her due weight in the union and silence the calumny “that her wide walks encompass but one man,” under whose huge legs we peep about to find ourselves dishonorable graces”

You must not for a moment suppose that any thing you have said has cooled the ardor of my attachment for you, that is impossible, it is built on too solid a base & founded in to intimate an acquaintance of your great merit to be so easily shaken. The beam is your eyes & you are searching for the mote in mine, there lies all the difficulty. Write me often, remember that this is for your edification & perusal only. Remember me affectionately to Mrs. Worth & believe me to be

NB. Your good friend Dudly will succeed over your friend Jenkins. 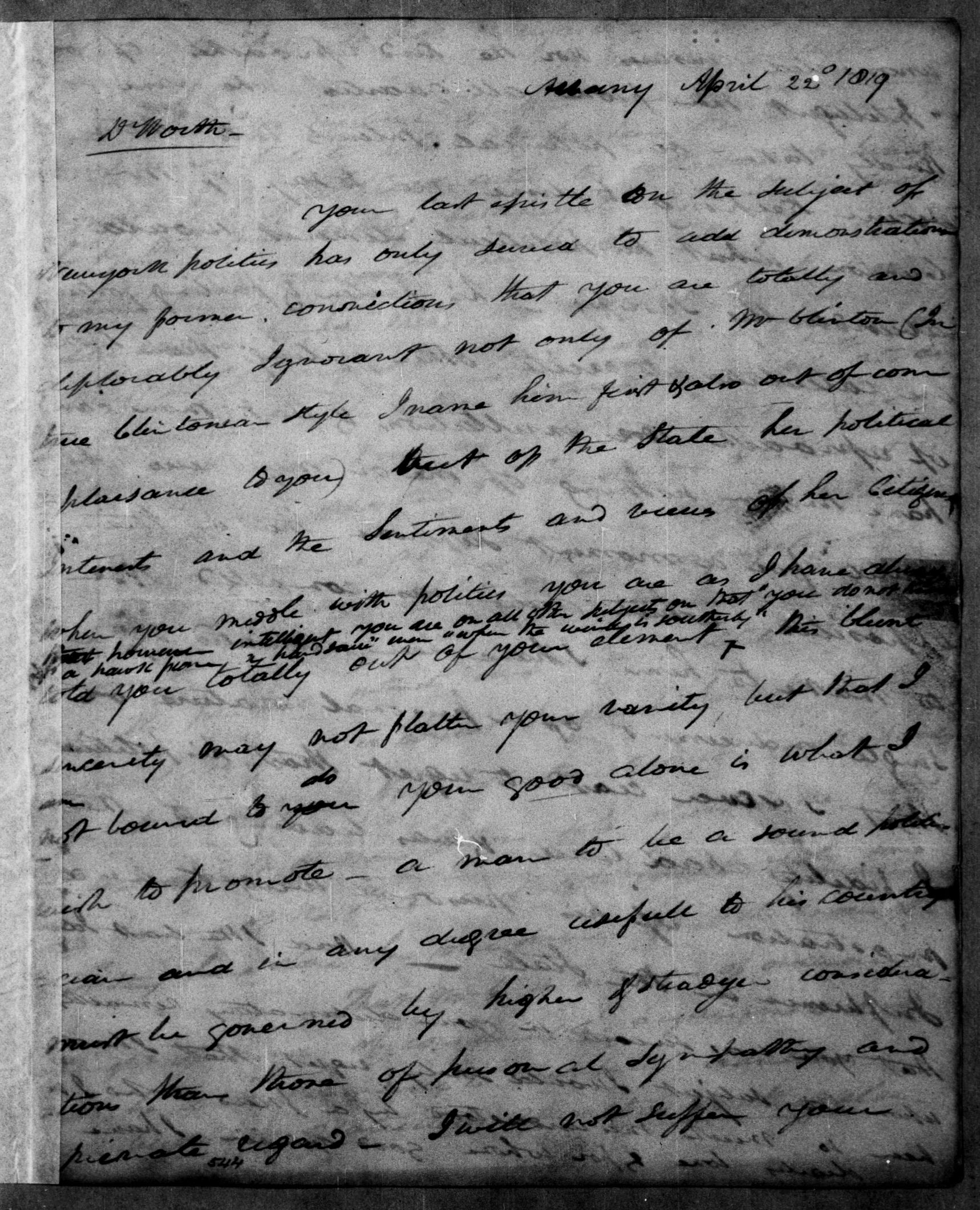 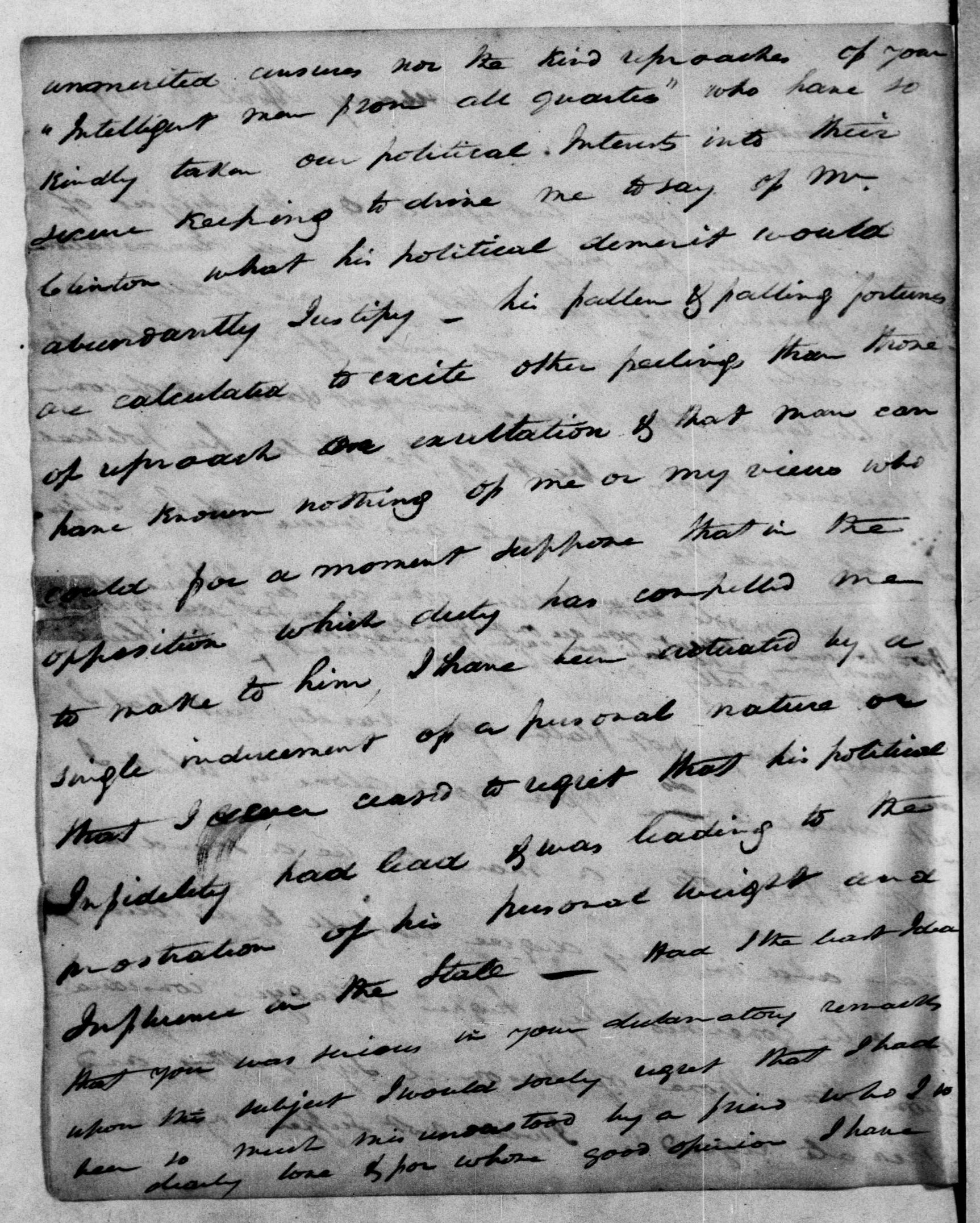 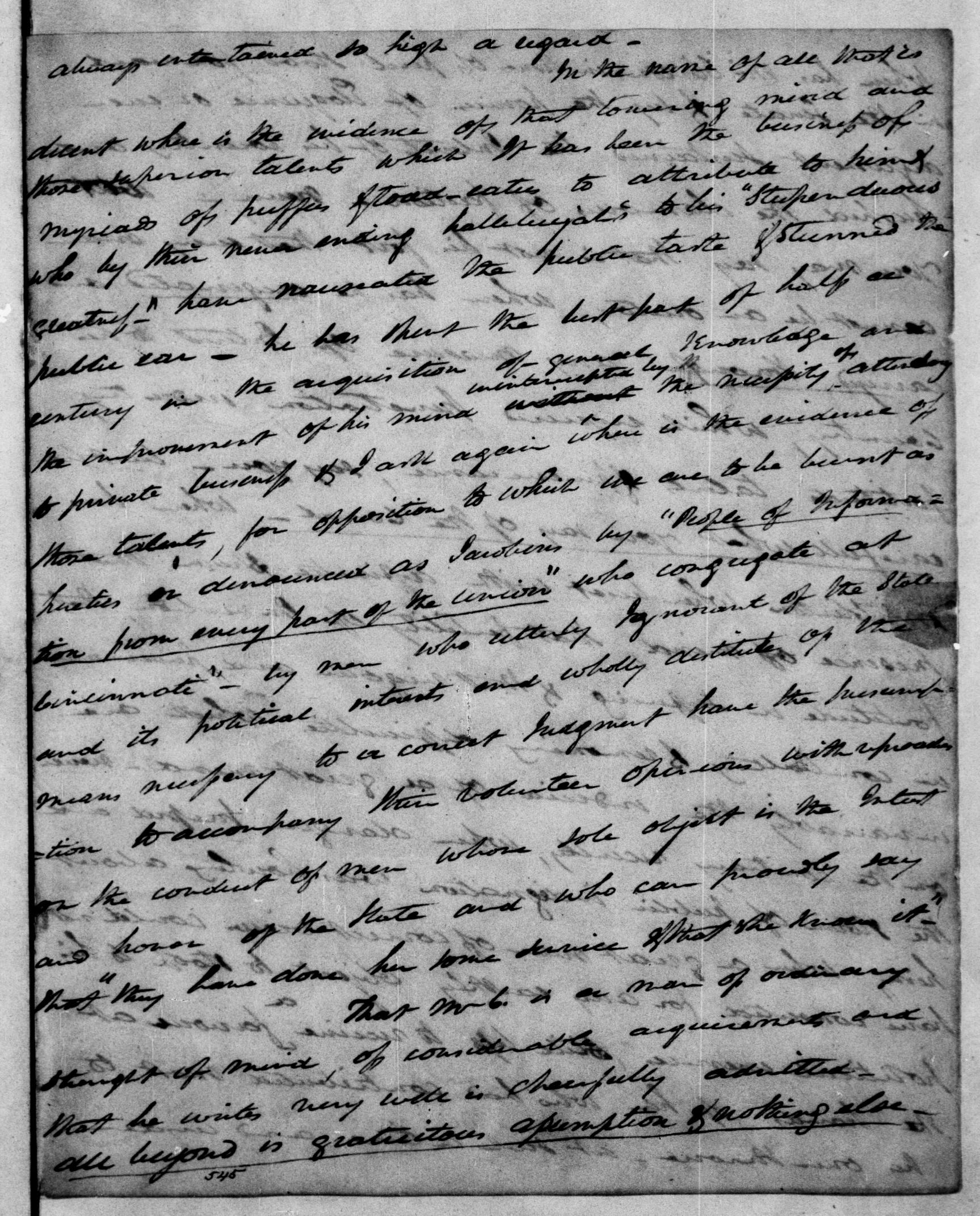 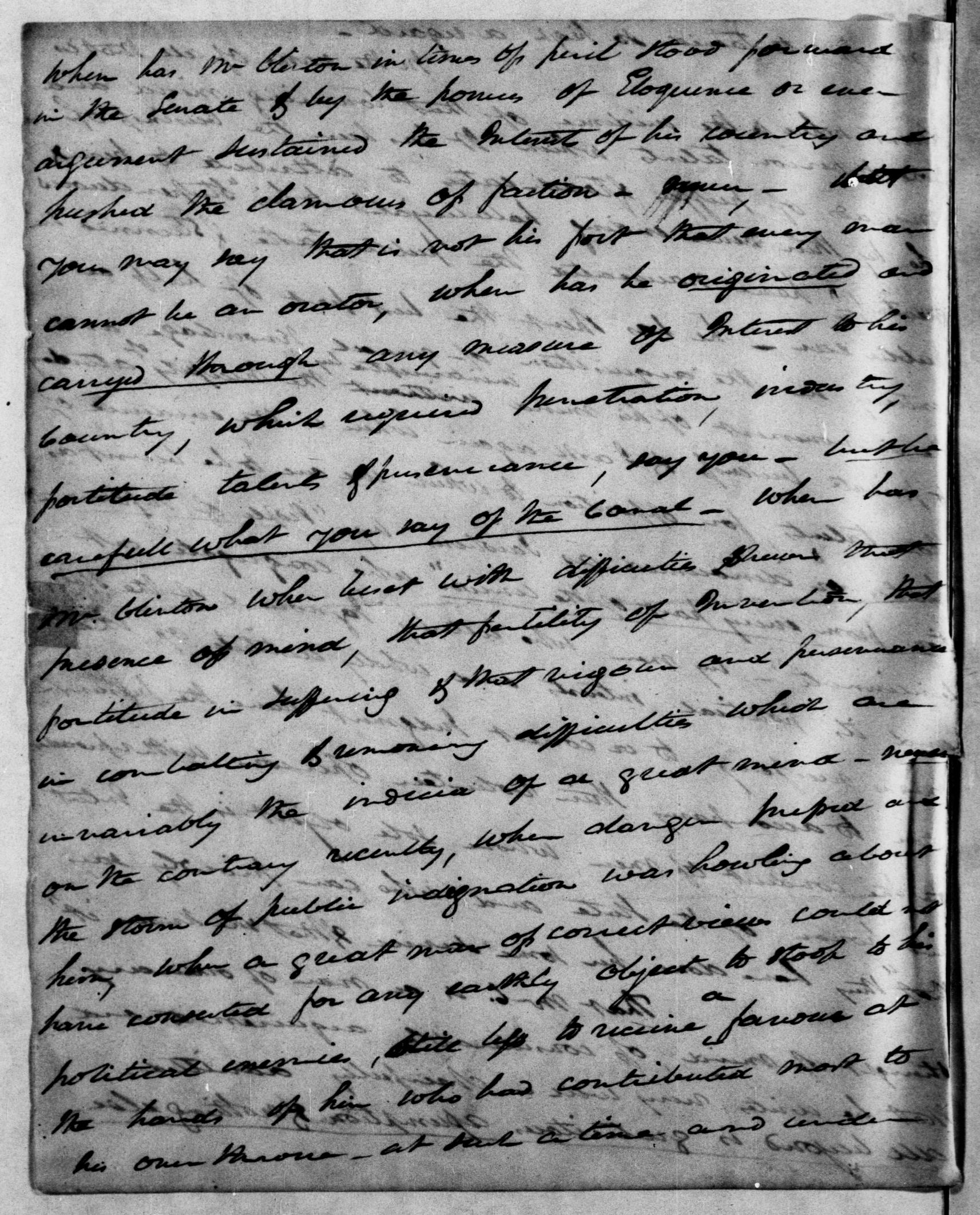 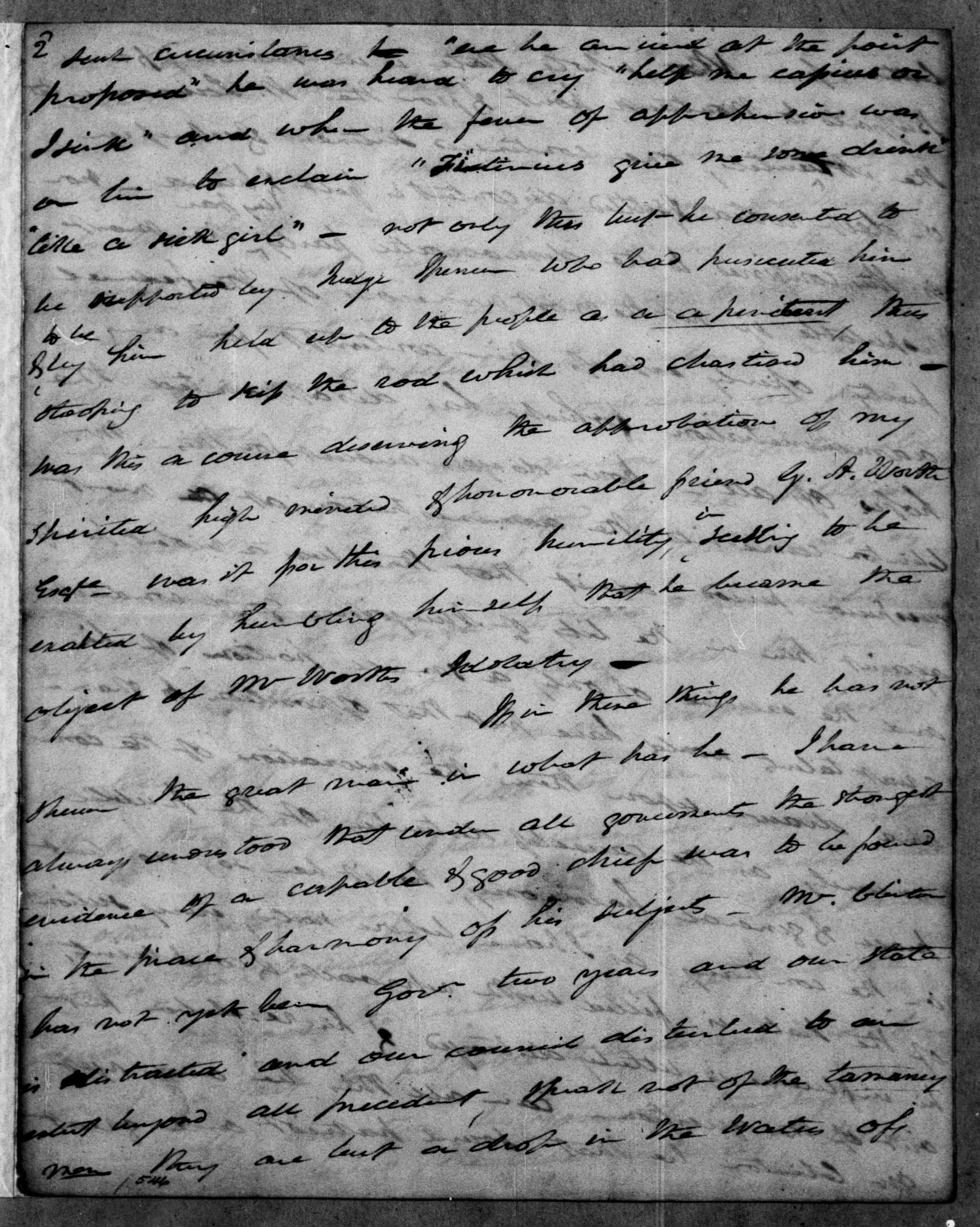 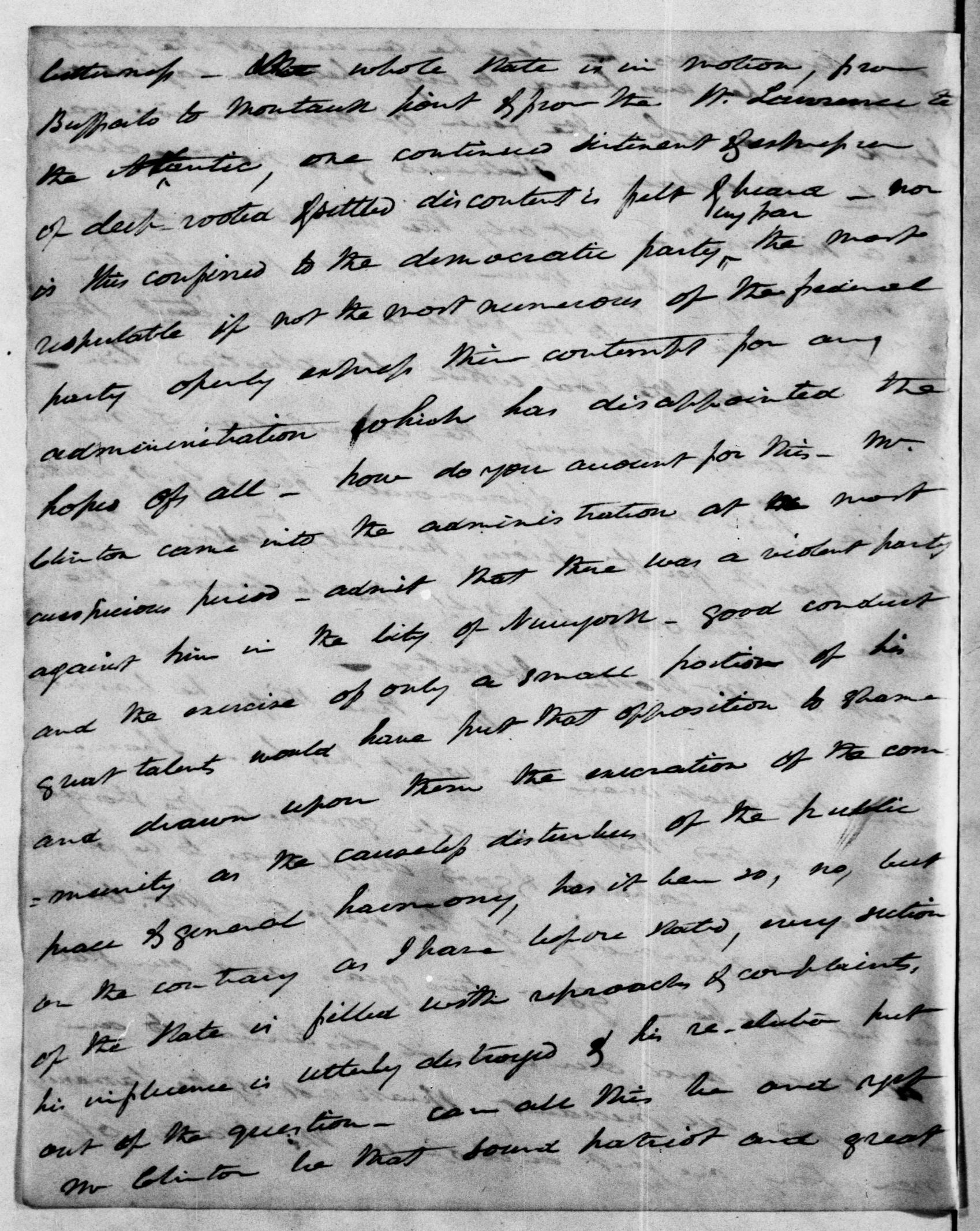 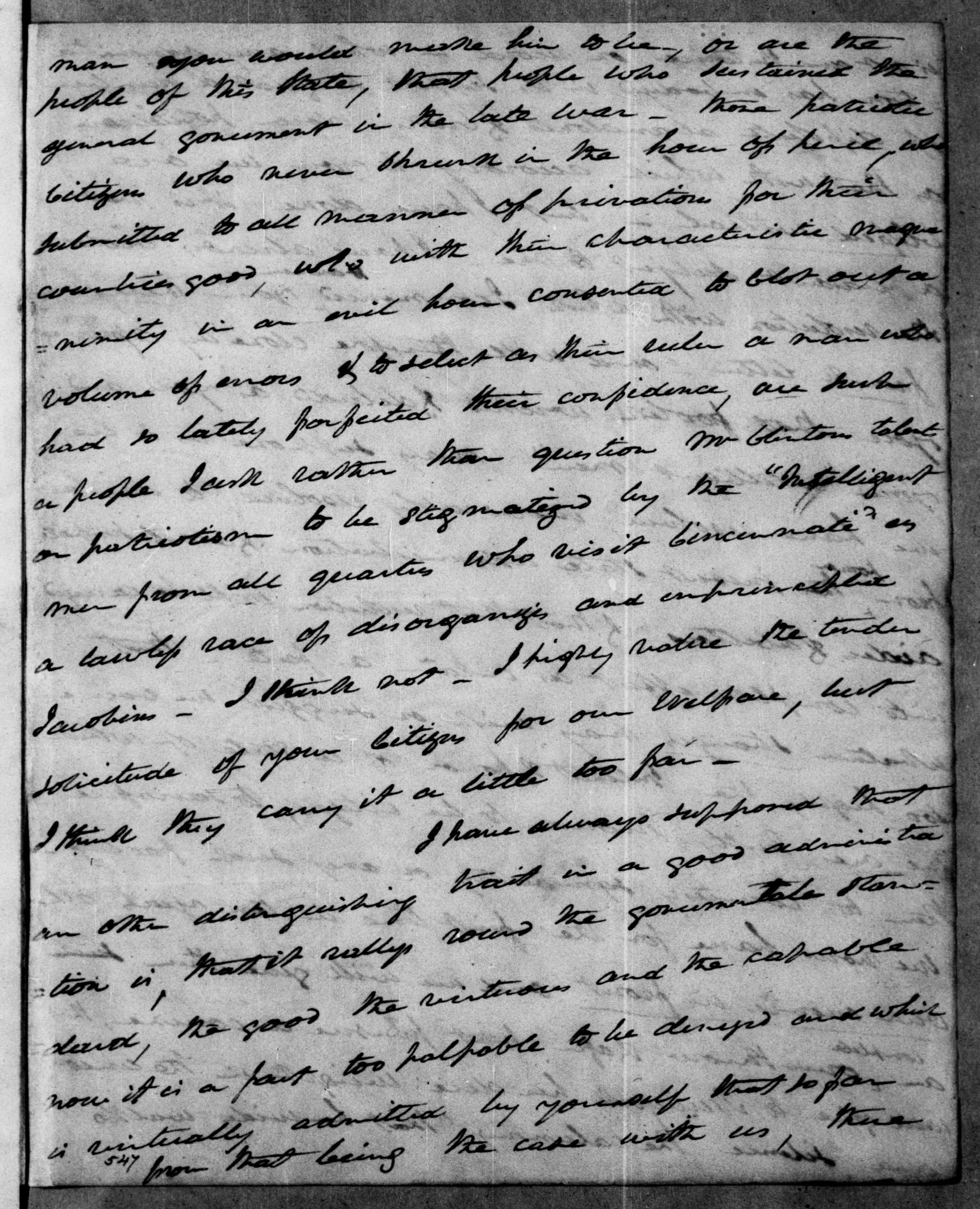 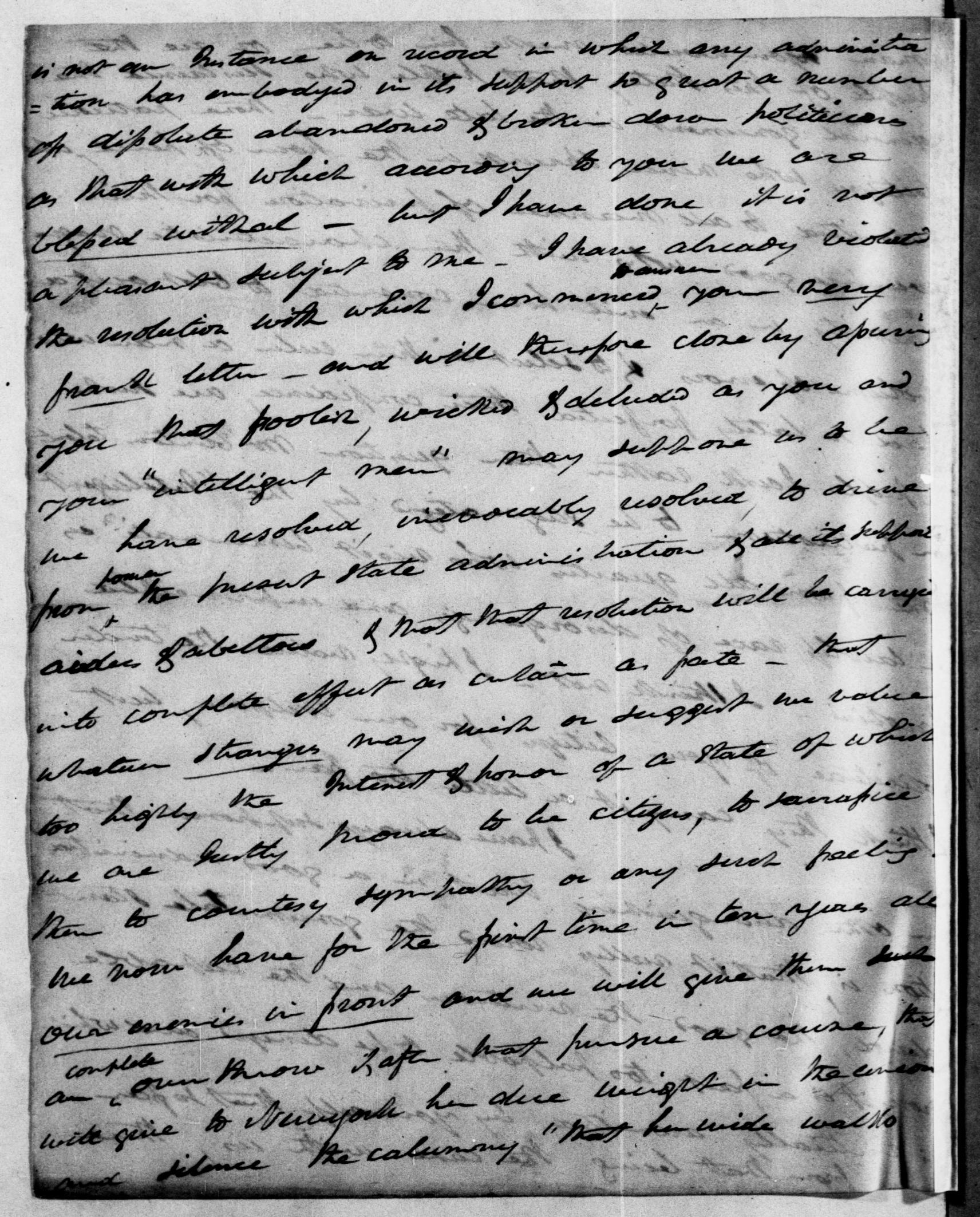 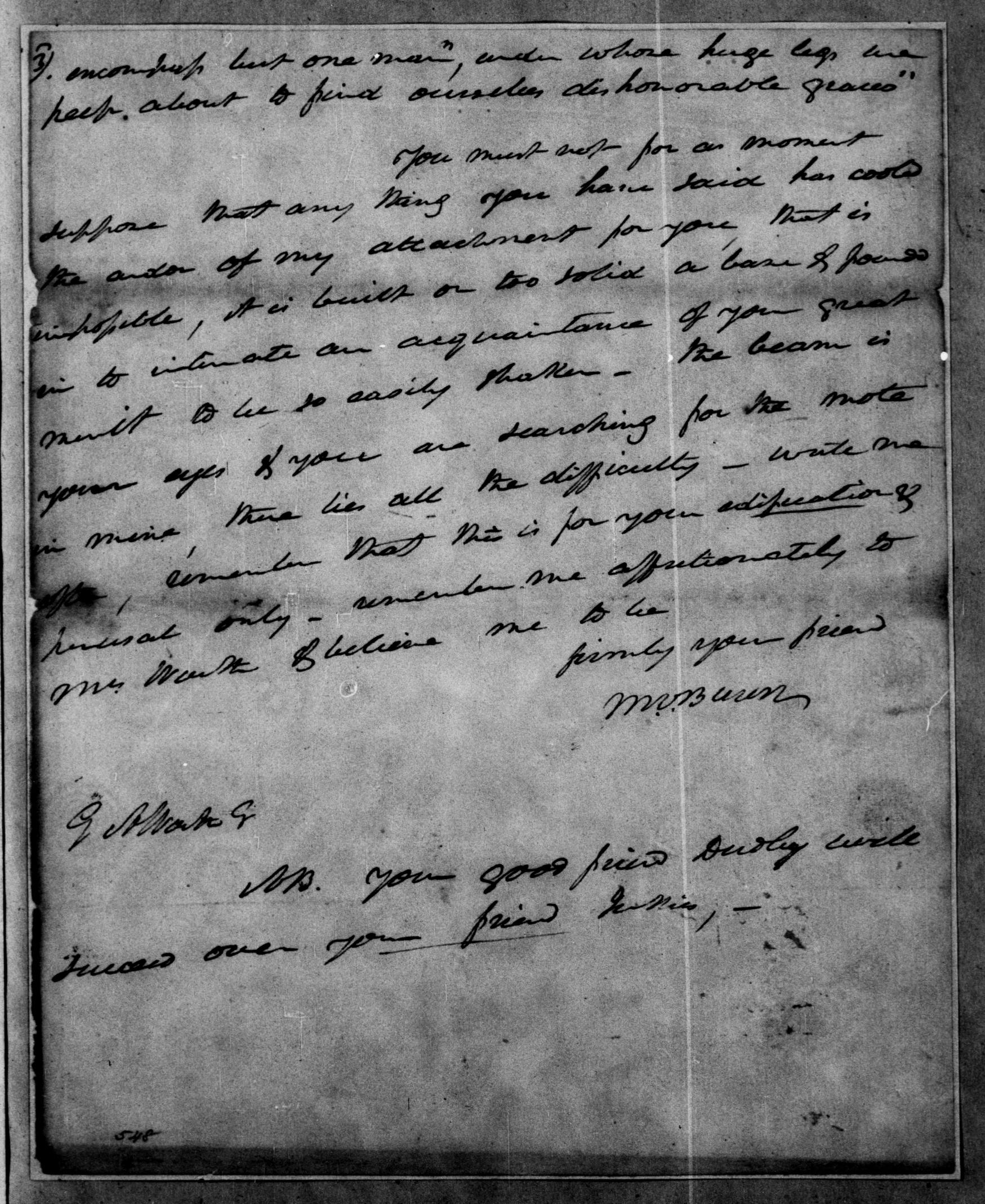 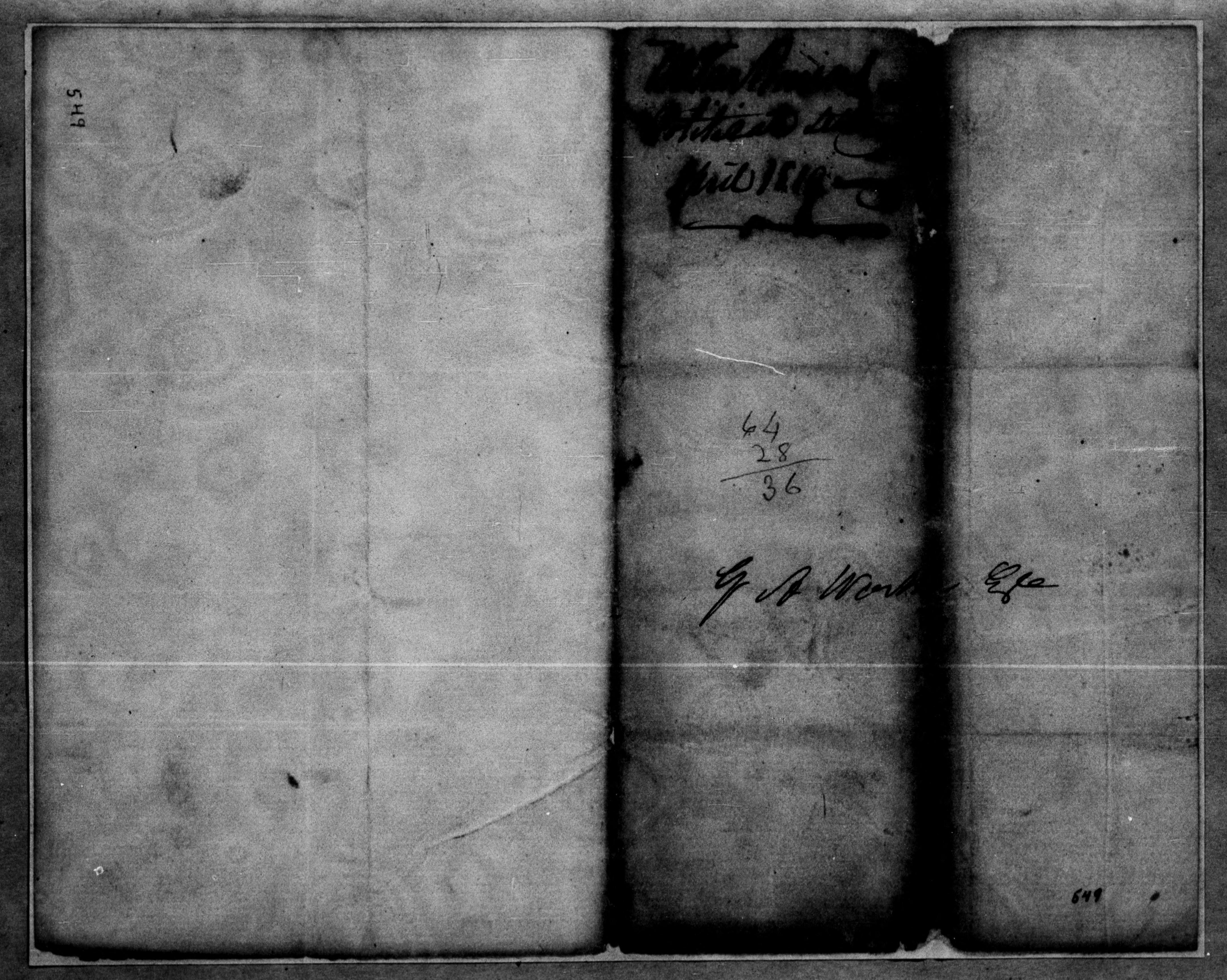