That I have been remiss in not writing to you oftener is most true but that you should from thence infer the least change in my affection for you would be most unjust, for if there ever was any subject on which there has been with me neither change nor shadow of turning it has is that of a steady and inflexible friendship & esteem for you & yours. When I found by Mr Olcotts intimation that I was in the fault I delayd writing, in the vain hope, indulged from day to day of being able to say something favourable to you of your Kane business but the Chicanery not to say Knavery of those people baffle all beliefs. After discharging Charles Kane as you all have done & as it was supposed wisely the property assigned to you has been undergoing a regular course of deterioration, 1st. the TenBrouck estate was found so involved & embarrassed that Mr Elias Kane offers $2000 to the Creditors for their interest therein 2dly. the Govr. property in addition to the incumbrances which were avowed to be on it is found subject to a mortgage to the esta state for $2300 ^of^ which nothing was said & which Oliver & Elias now say must be paid out of the Joint funds. 3dly. the Glass house Stock which was in the Inventory presented to the Creditors being found, (although in part real estate) to be ^by the^ law converted into personal & therefore not technically subject to the Judgment has disappeared. The Creditors are here & have for a week past met day after day, they are now in session to make some decission. Mr. Olcott is so disgusted & mortifyed by their conduct that he is at a loss what to do—he will however I am satisfyed pursue what will under the circumstances be the best & when they get through I will write you again. You have doubtless heard of my purchase of the house &c. with which I have already had more trouble & Vexation than all of them are worth. I will however before I have done with them square the yards with them I hope—at all events I have lost ^all^ solicitude on the subject &c. So much for this unpleasant and unprofitable concern, hope for the best & all the good which can be done for you will be.

I am happy to learn from Mr Baldwin that your affairs are so promissing & that according to his account you have laid the basis of a splendid fortune, but I apprehend that in the warmth of friendship he exagerates the matter I fear that your part of the country is at the present moment visited by that speculation fever which you know has made such ravages here in former times & which has so perfectly prostrated the value of real estate with us that it may literally be said to be worth nothing—but should this ^<not>^ be so I have not the remotest expectation of satisfying you of it for I know well that where that complaint rages it is vain to expect any one to be sensible of its existence. I confess hower that nothing would delight me more than to hear that you had sold out all your landed interest cheap very cheap for at such times it is that the wisdom of the saying “that a man to make money should buy dear & sell cheap” is amply provend—so much for yourself & so much for advise which may be attributed to good motives but which most probably will not be much thought very wise.

To shew you to I am not only willing to give but to take ad counsel I will detain you a moment on my own affairs. You have heard of the appointment of the Chief Justice as Secty of the Navy (you know he is a good sailor & if you want to go or send into that department he will not be insensible to the merit of you or yours) this you know has produced a vacancy on the bench & who shall grease the seat, is the point which has & does occupy the attention & engross the chat of this goodly & busy people, & I confess to you ^only^ has engrossed my thoughts to no inconsiderable extent. The canditdates are without number & many of them equally confident. Woodworth Talmadge N. Willms of the Family corps or house-hold Troop—Jay, Johnson, Oakly, Emmot & Henry of the neutrals are all spoken of. The present councill will appoint me if I wish it in despite of all opposition but whether I ought to take it or not is a question of much difficulty. The situation is a very eligible one but the pecuniary sacrifice would be considerable. The man who is now appointed must if he bids be Chief Justice in nine years & Chancellor soon after if he chooses & behaves well—to suffer a young man to get on now would be destroying the value of the place hereafter. What say you write me fully what you think upon the subject. I go on Saturday to have a long talk with John C. H. who after all you know is a sage grave man. Although my name is sometimes mentioned yet between those who think I would not take it & those who think I could not get it the current of opinion runs a different way.

Mrs Van Buren has been sick three months, dangerously so, but is now recovering. I hope Mrs. Worth is well & happy. unitGive our best respects to her. Write me often & believe me to be

NB. They agreed last night to a decission, but have not <illegible> will they I think conclude <finally> on it as I have already had more to do with those fellows than I wishd I would prefer not to have my name mentiond in regard to them unless to some beneficial purpose to you then you may do what you please 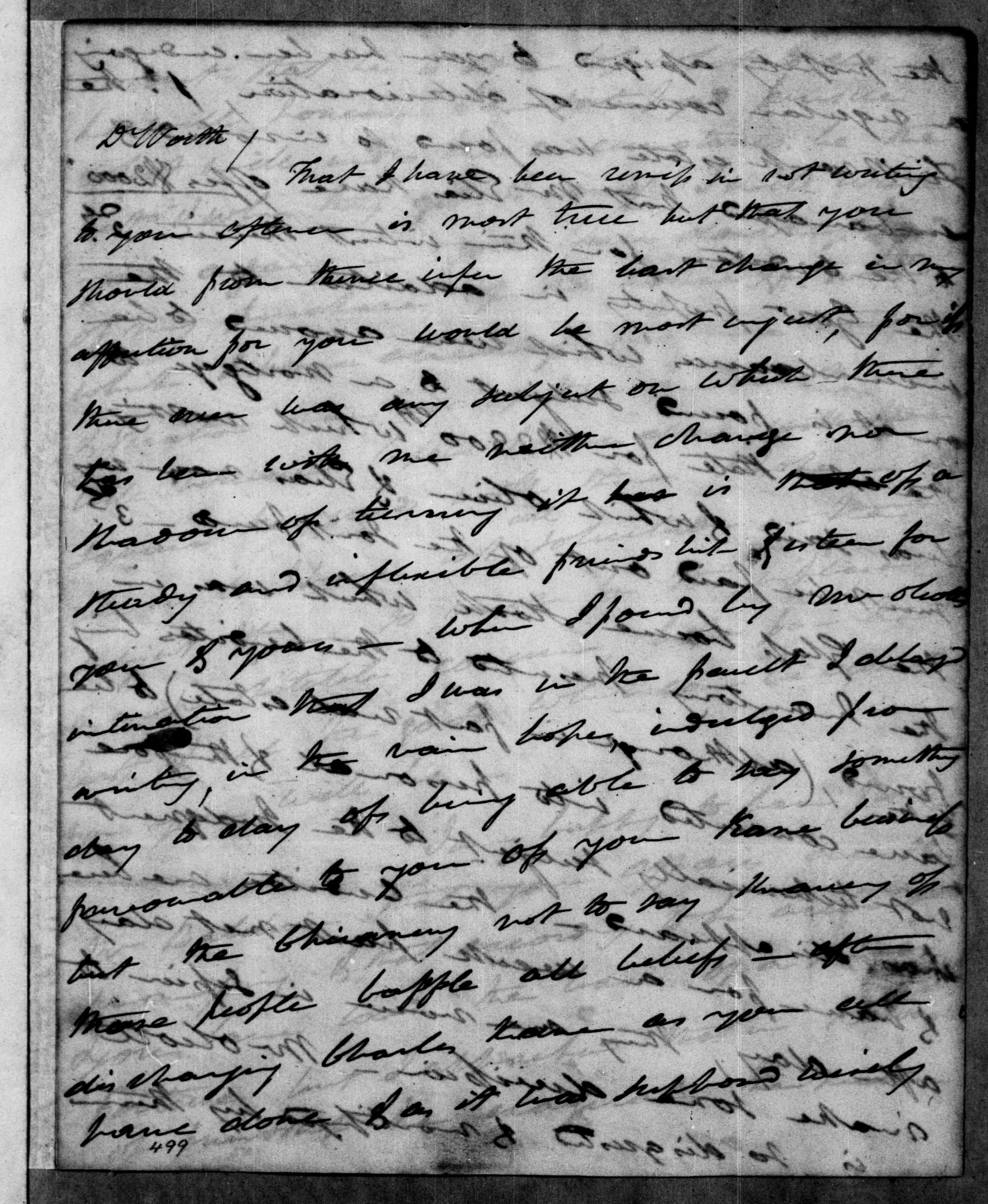 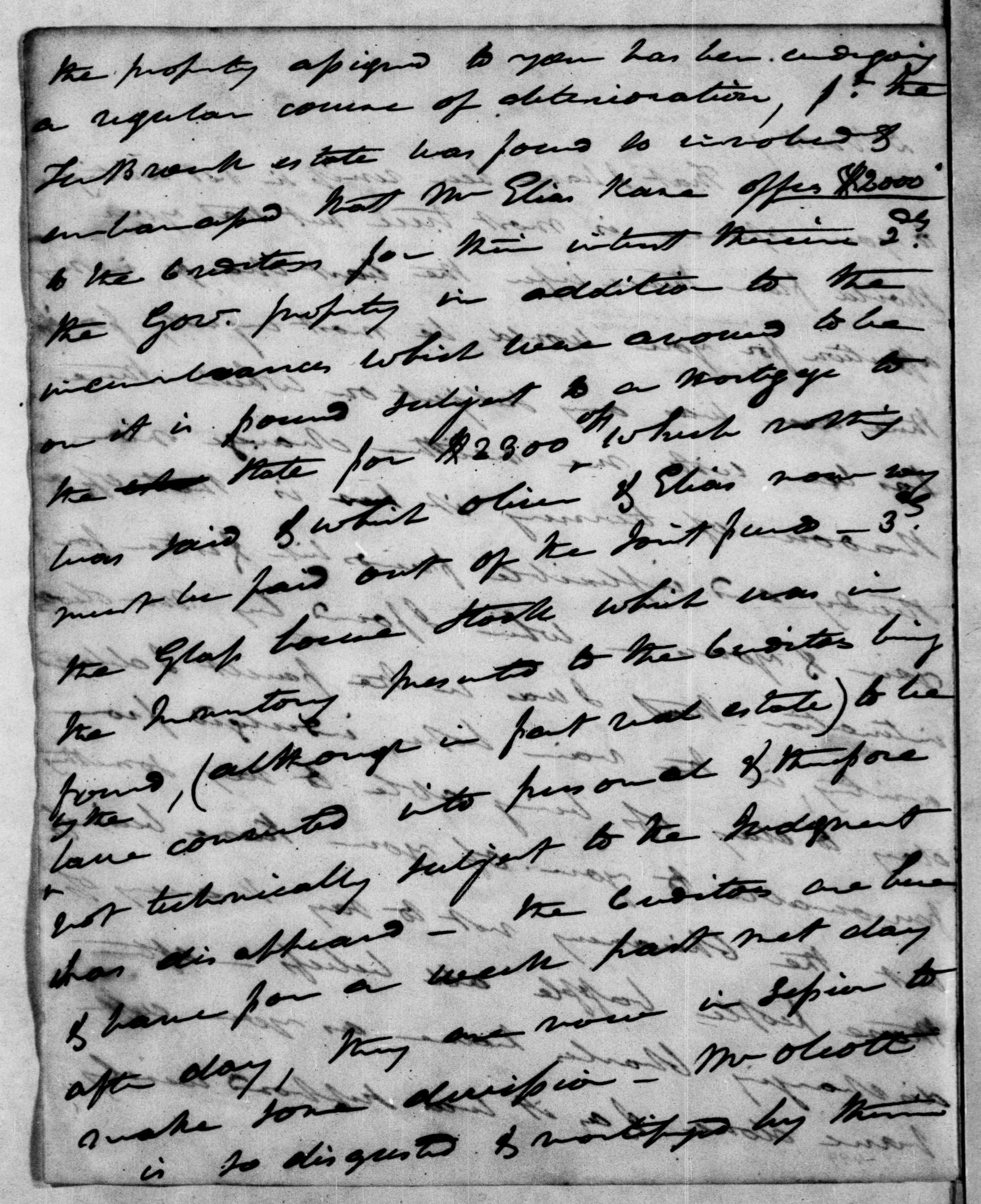 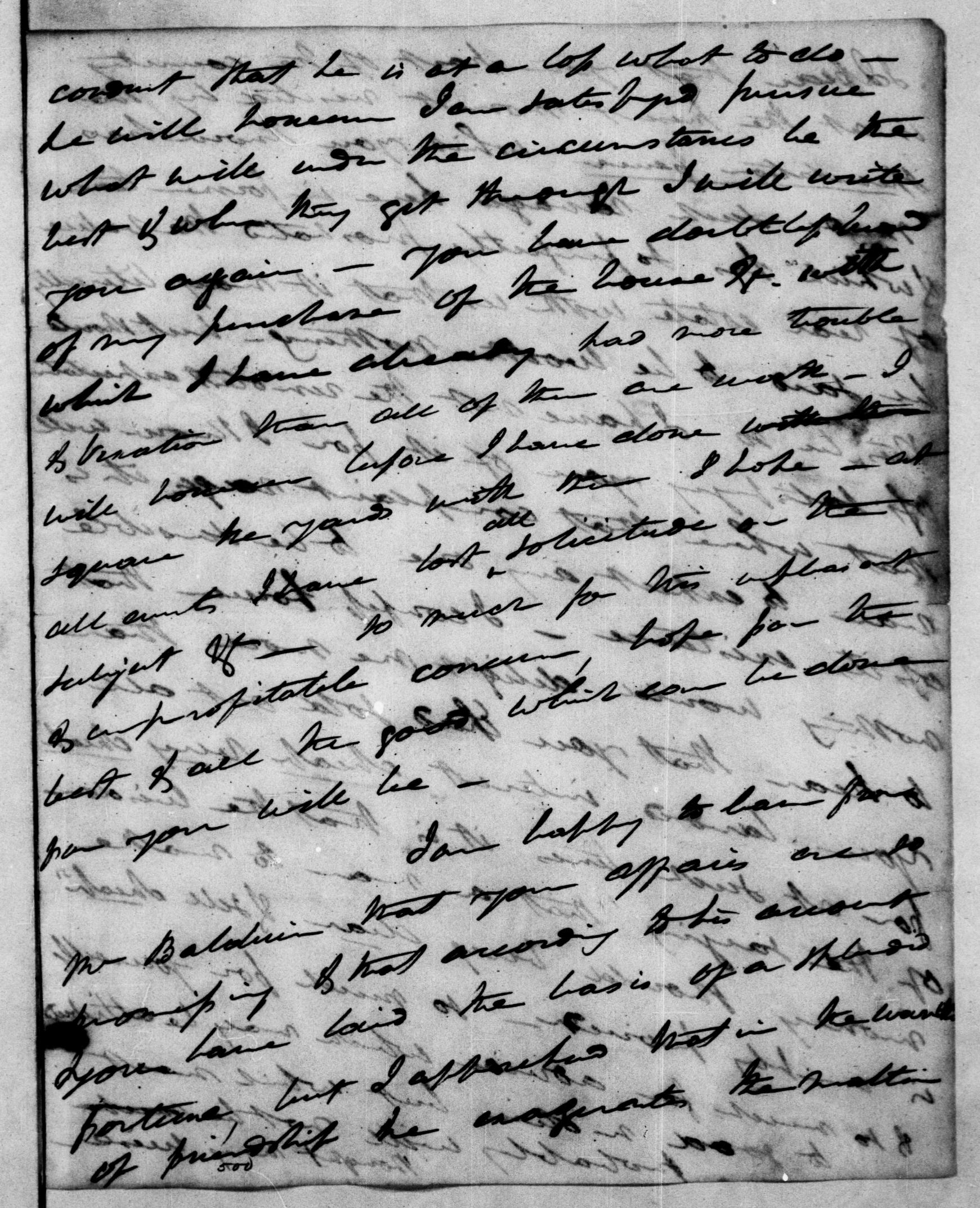 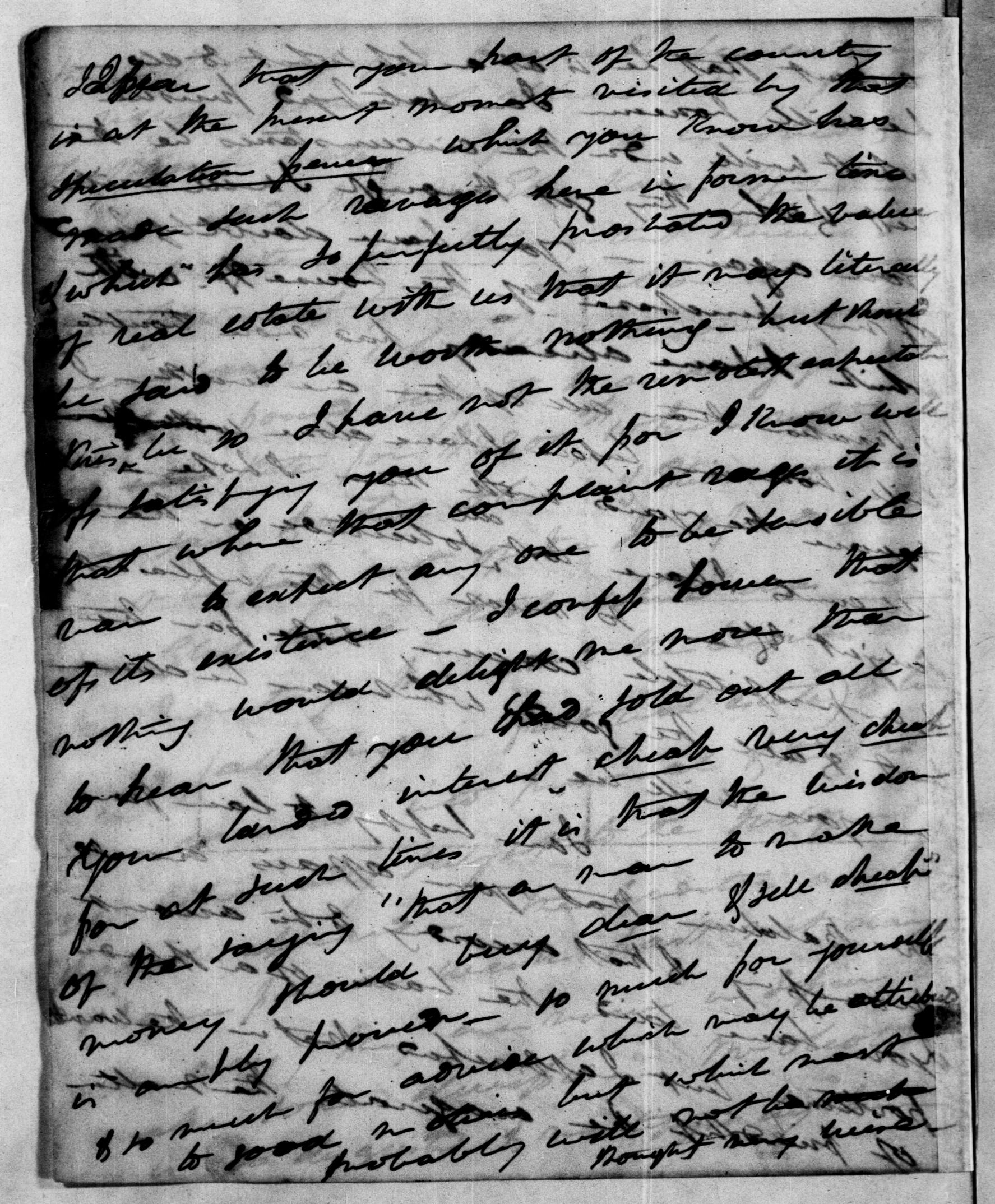 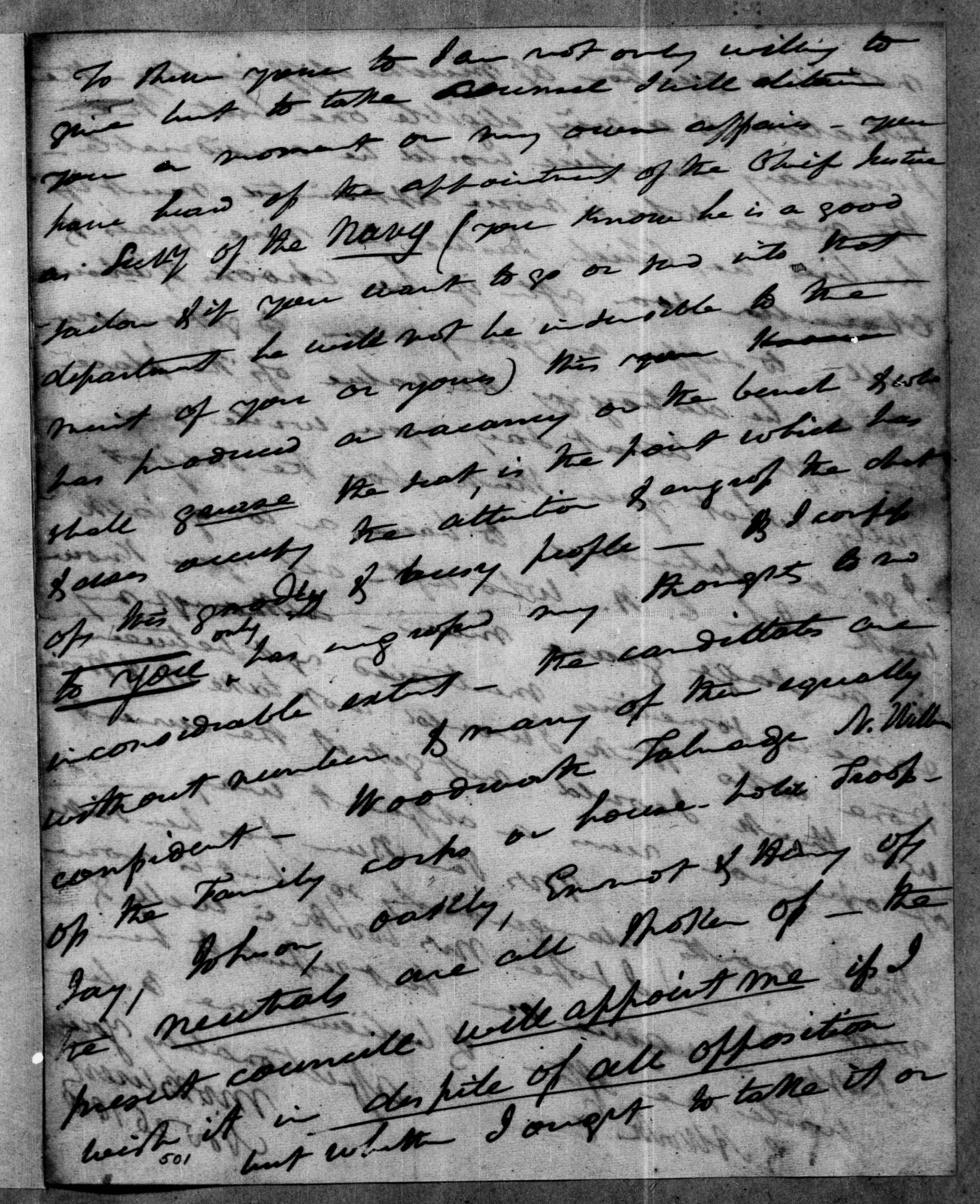 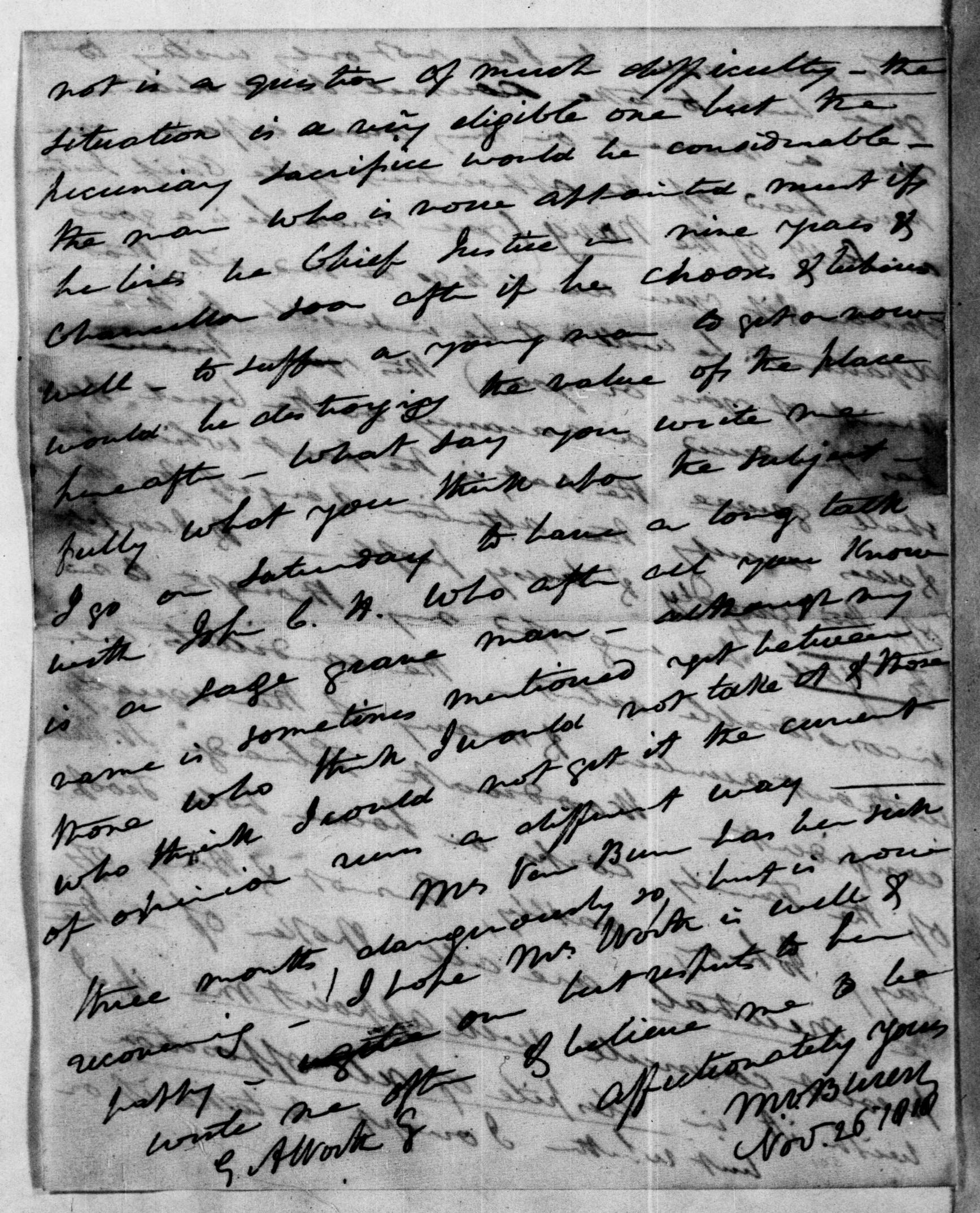 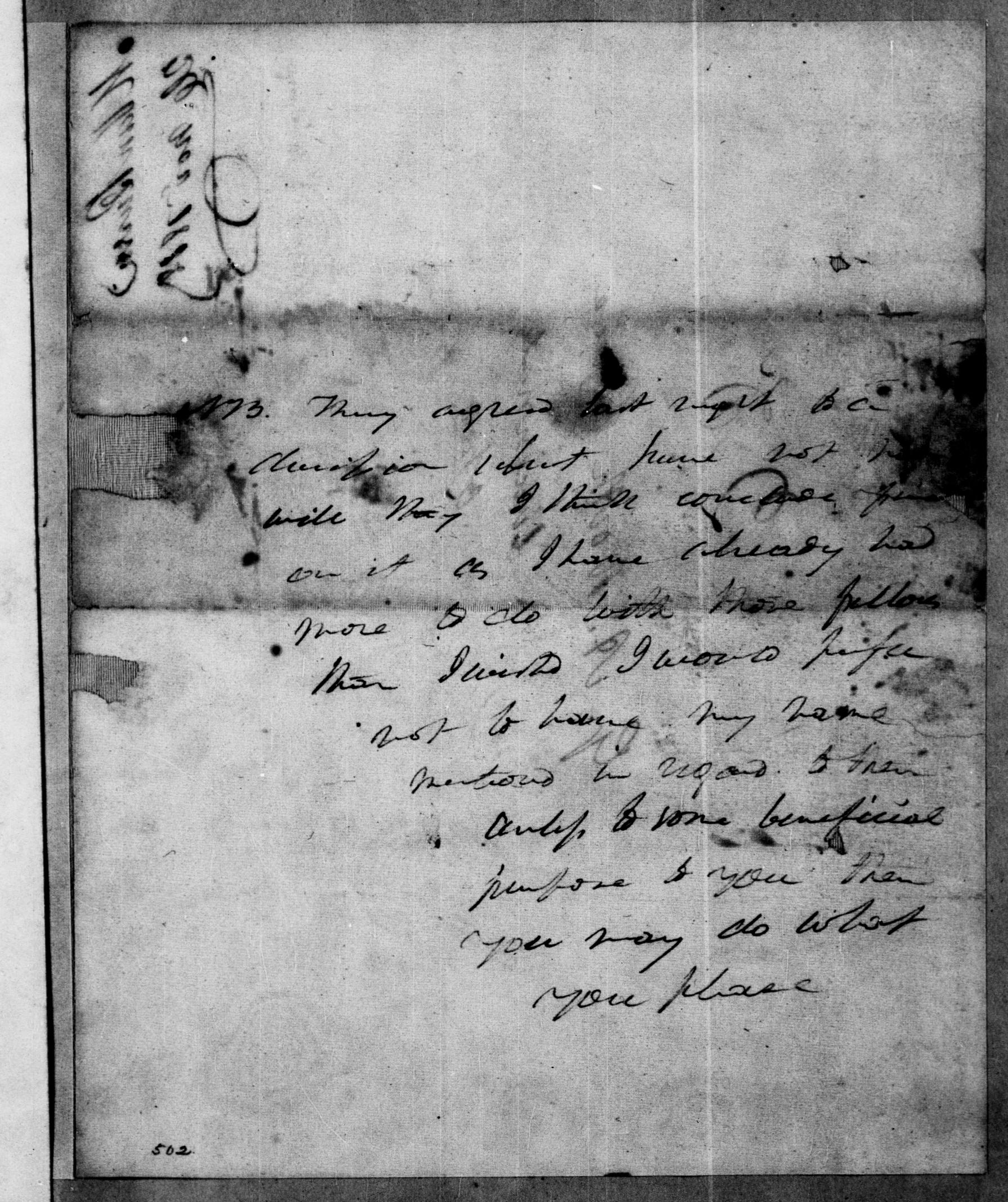 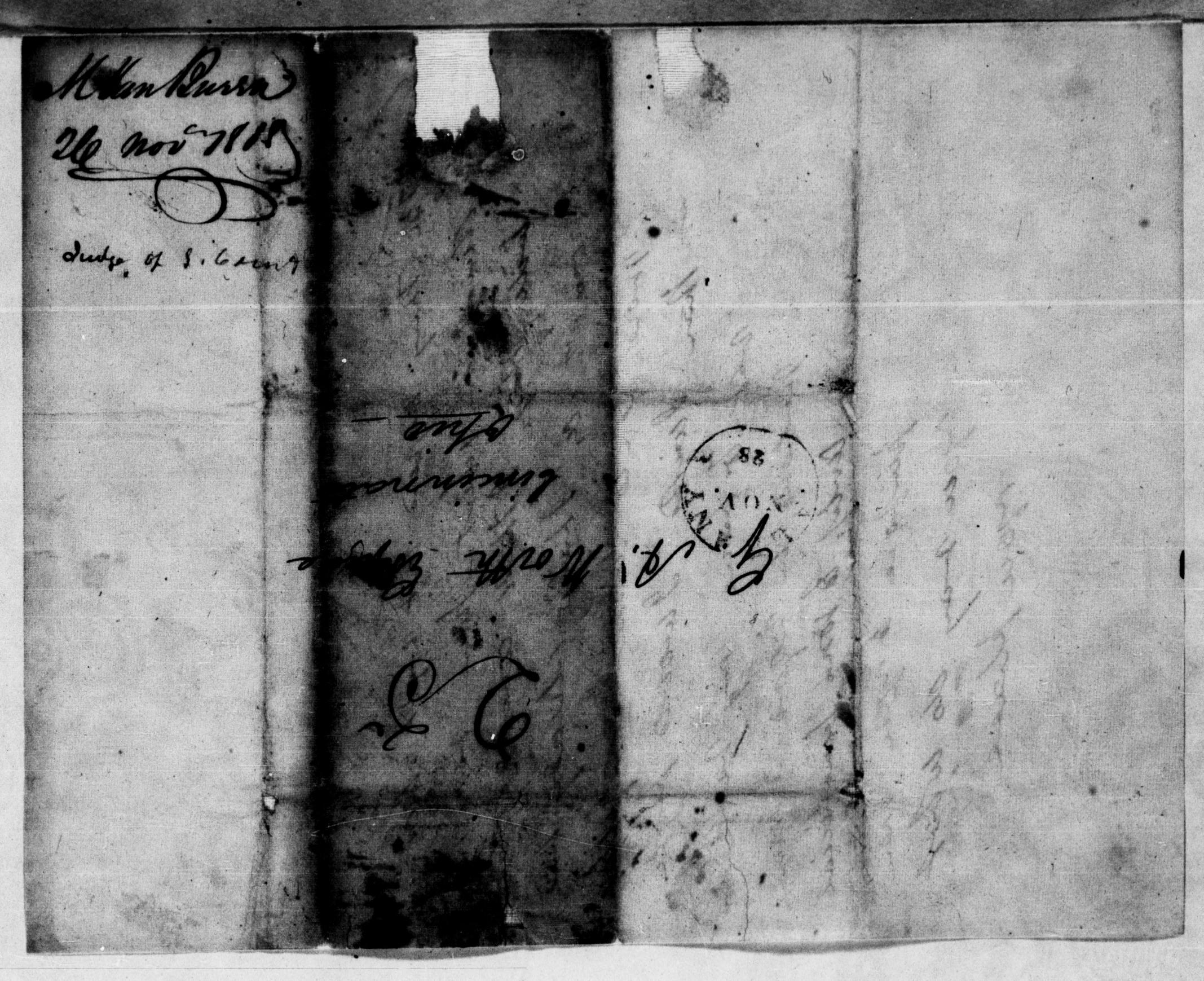