A more ceremonious but less honest friend would detain you by a string of laboured excuses for not writing you before of which probably one half would be founded in fiction. I will do no such thing, you know what a winter is to me & your good sense if accompanyed with good feeling will long since have suggested my Apology & if you have been destitute of the latter which you know is sometimes the case there has been time sufficient to render the fermentation complete.

The representatives of the people god bless them & the people too, have turned their backs upon us & whatever of Constitution, laws, morals & public Spirit has been left is by all good men regarded as so much unexpectedly saved The elevation of your good friend Clinton or at least contemporaneous with his elevation we have had brought upon us a greater degree of unadulterated Jacobinism than ever this State was cursed with. I have been in the whirlwind & am almost the only one who has escaped unhurt. His excellency stands on a giddy eminence on which the difficulties of preservation are so great & distressing that many men would prefer political prostration as a choice of evils. His dependance on the so old democratic party is established beyond all the doubt & whether he receives their support or not will depend altogether on his future conduct. From my soul I wish him well. Your friend the Judge has I believe got to the end of the rope. I do not believe that he has a political enemy who wishes to see his influence reduced. Father Taylors influence remains unshaken as you will perceive by the Removal of the doctor. Sir Philip is cap in hand & the puritan Hawley has been begging all winter for a <sip> or a <dose> <of> <illegible>. The truth is that never were men so wofully disappointed as have been the household troops of who served in the last campaign. They have generally speaking lost all but their characters & those they have not it for an obvious reason. So much for Politics.

I have entered warmly and feelingly into the branch bank question & you must not only assist us but come here & <live>. The main question is between Dudley & Jenkins for President and a smaller one is between Butler & young <Chester> for attorney. You know your own business best but I should be devoutly glad to see you here. Depend upon it that Olcott cannot be appointed but that Douglass will with respect to this last matter you must distinc[tly] understand & by no means forget two three thing[s] viz 1st. That the support of Douglass is found[ded] on the circumstance of your refusing & that on your assenting to come it is will be instantly and cheerfully withdrawn. 2d. That it was decid[ed] on before I was consulted on the subject, & which was too late for successfull interference. 3[d.] that you are not to know that Mr Douglass is a candidate for if you do it will furnish just ground of complaint agt. me—dont forget this. I have confidentially informed Mr Olcott how the matter stands. The following is the ticket we support & which you too must support by urging Mr Smith to have Mr Bownes ticket adopted without going into particulars for there are but three men in this City who have seen the ticket vz Charles E Dudley, M. [V. B]uren, Wm. Caldwell, Walter Clark, T. Sedgwick Jnr., John Stilwell, Stephen Van Rensselaer Junr., Gerrit Y Lansing, Mess King, Jillis Winne Junr, John N Quackenboss, Robert James & Elisha Jenkins. I flatter myself you will approve this selection dont let your prejudices agt. old James be transferred to the young man, he can be well brought up Sedgwick you know is a clever fellow, he is the particular friend of Mr Williams of Baltimore whose support we calculate on, Gerrit Y. I propose to make over again dont you make any foolish sacrifices [b]ut if you can without them come [he]re & take charge of the Institution you [c]an spend your days happily. Write me often make my best respects to Mrs Worth & be sure when you do write to let me have a legible hand you write you villanously that it is like pulling teeth to decipher it.

I can say nothing yet about your Kane debt, Olcott will advise me as to every step he takes & we will do the best we can 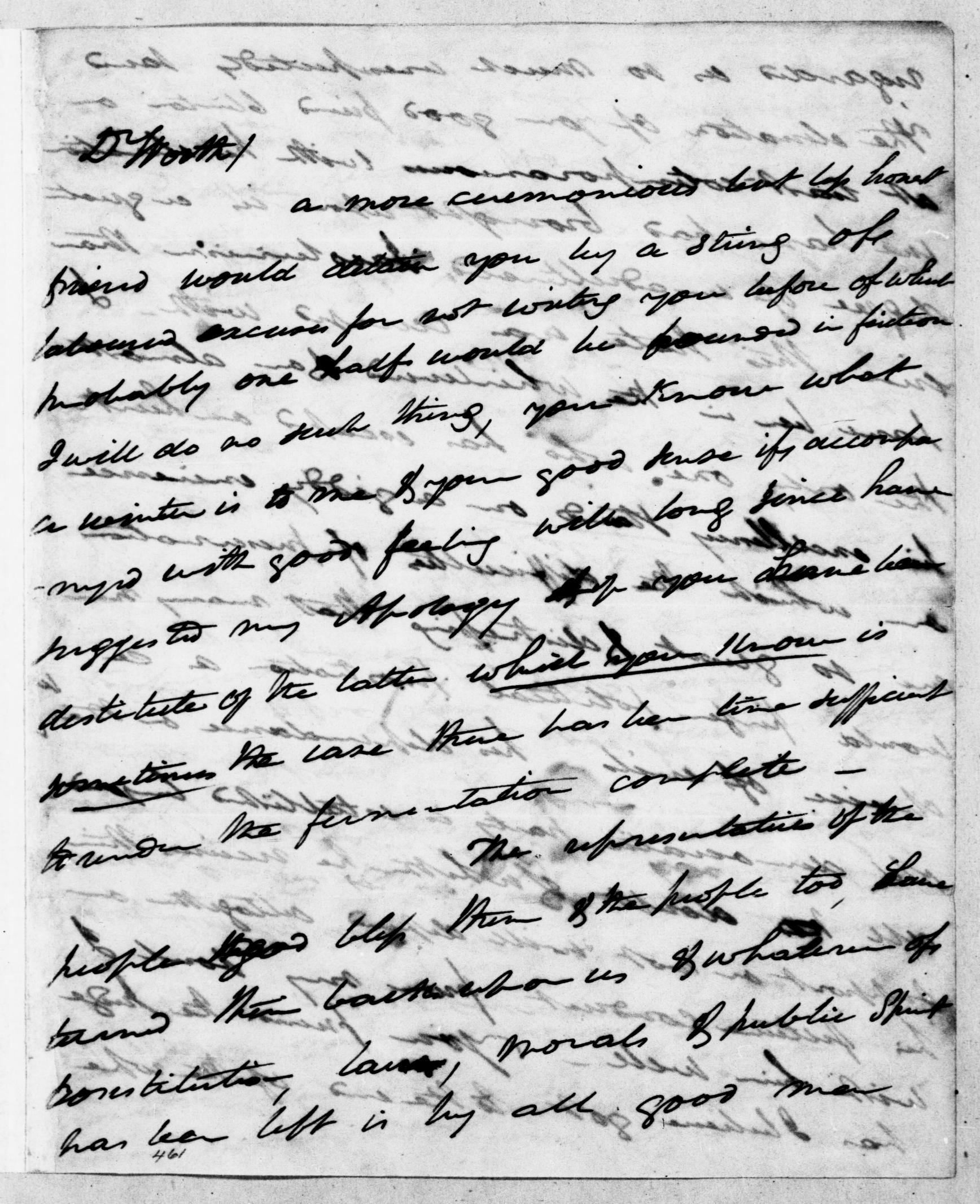 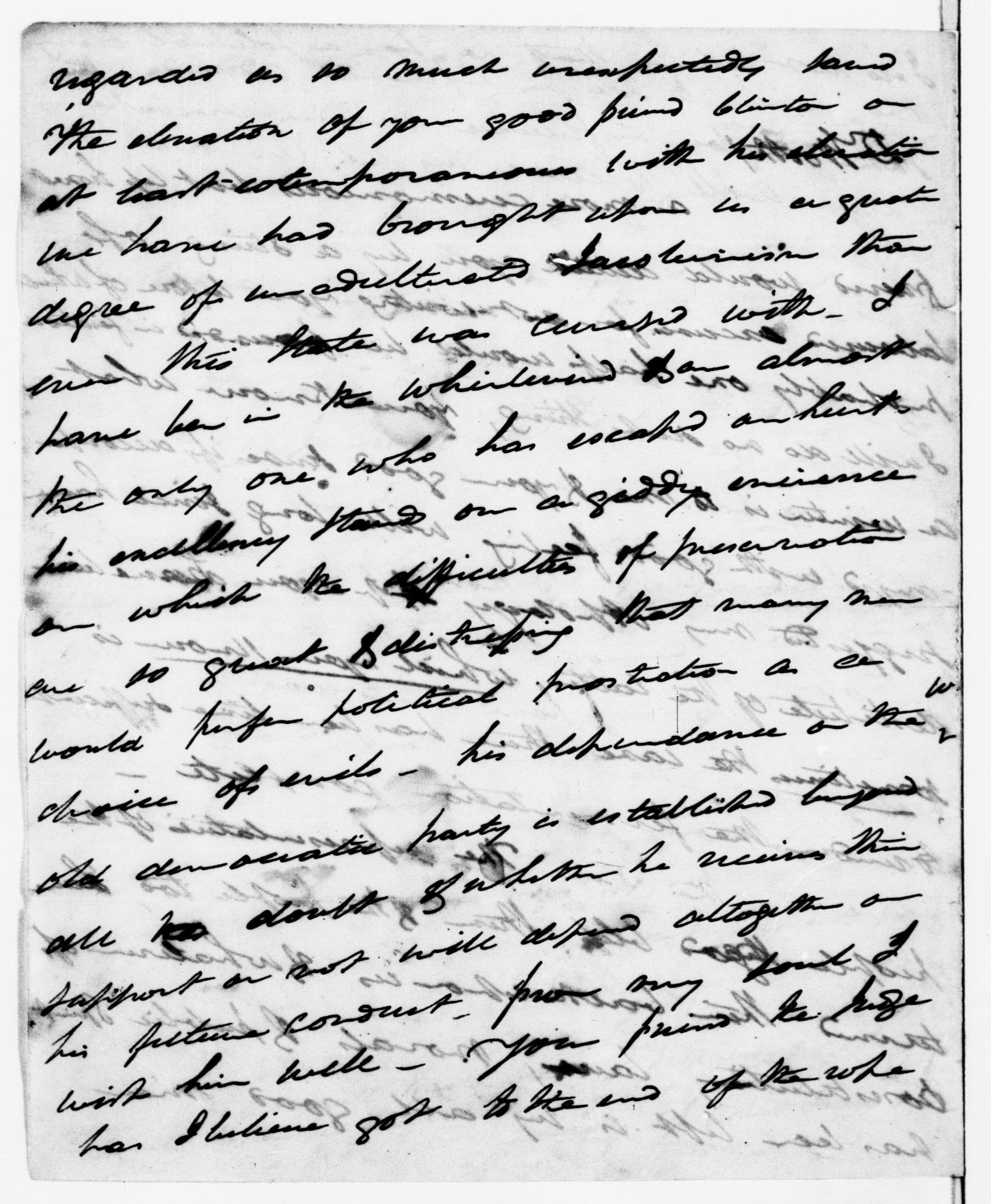 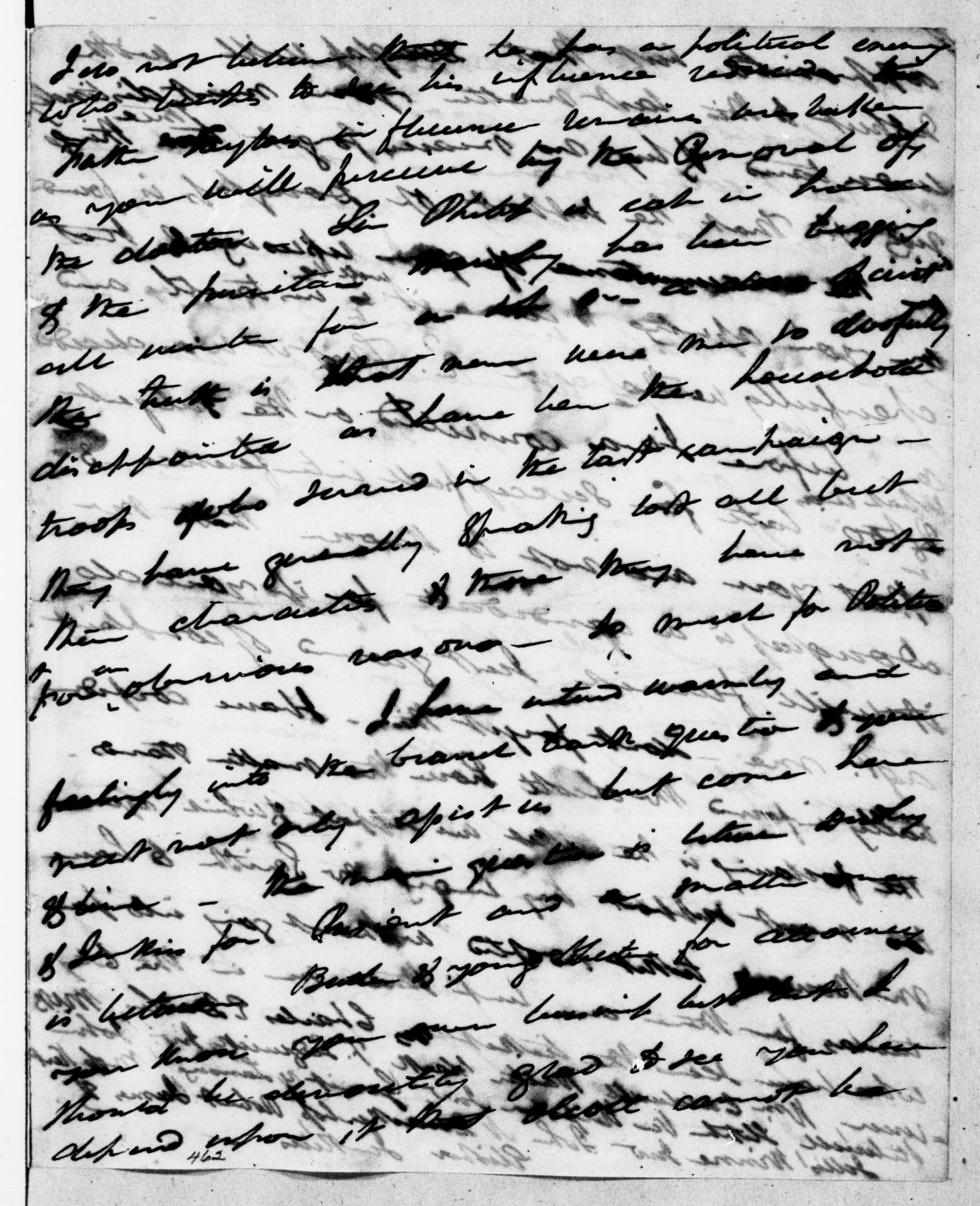 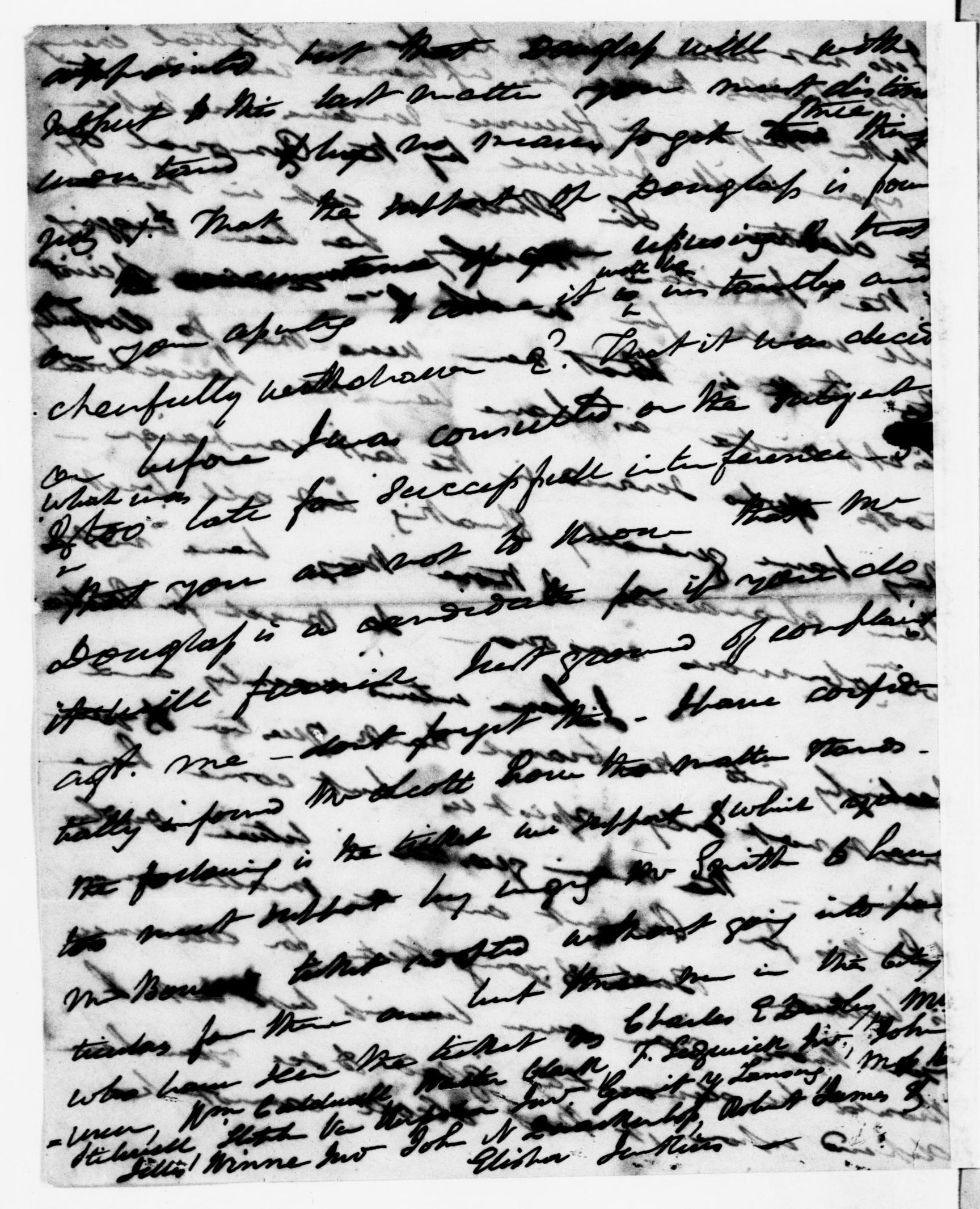 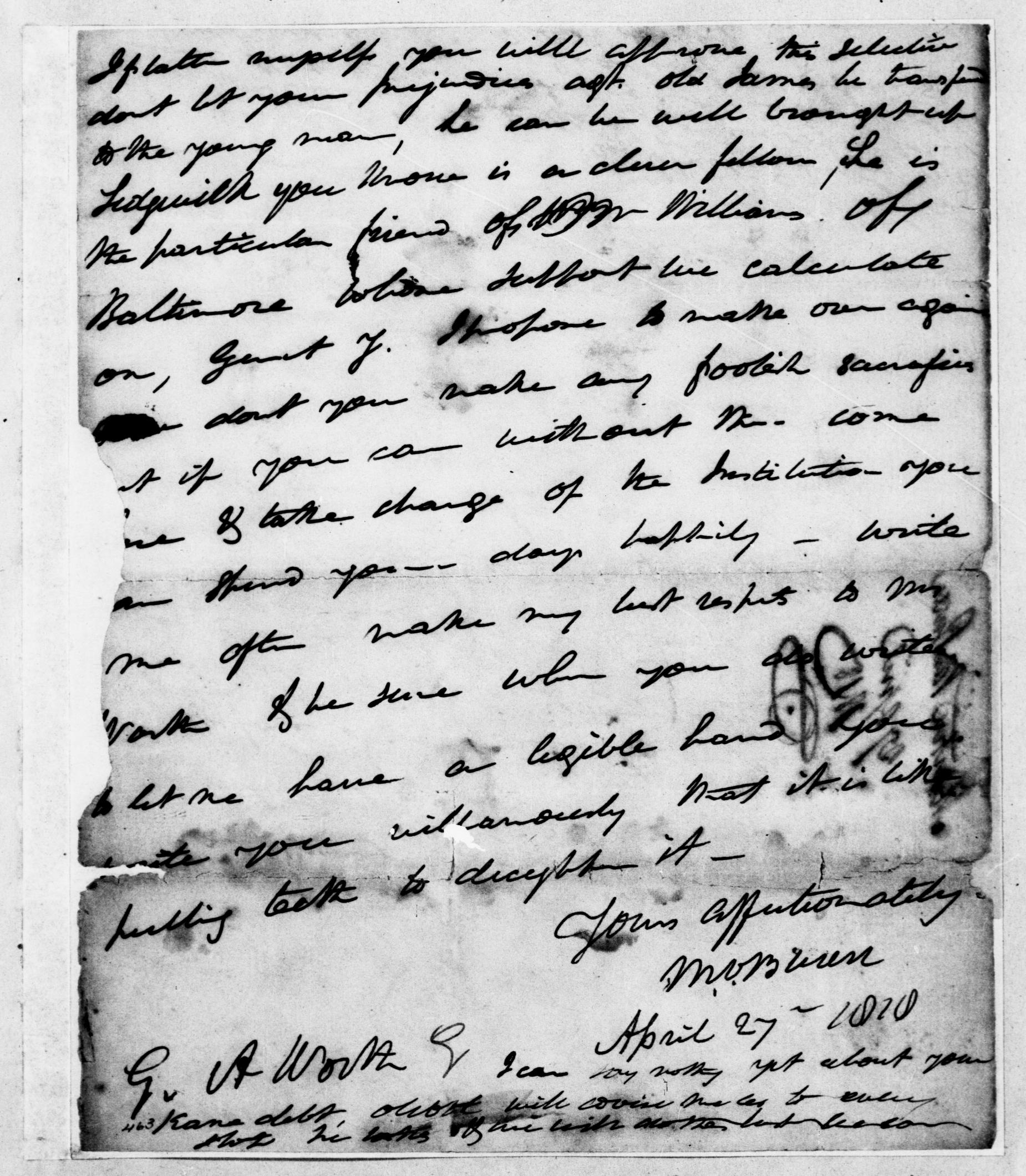 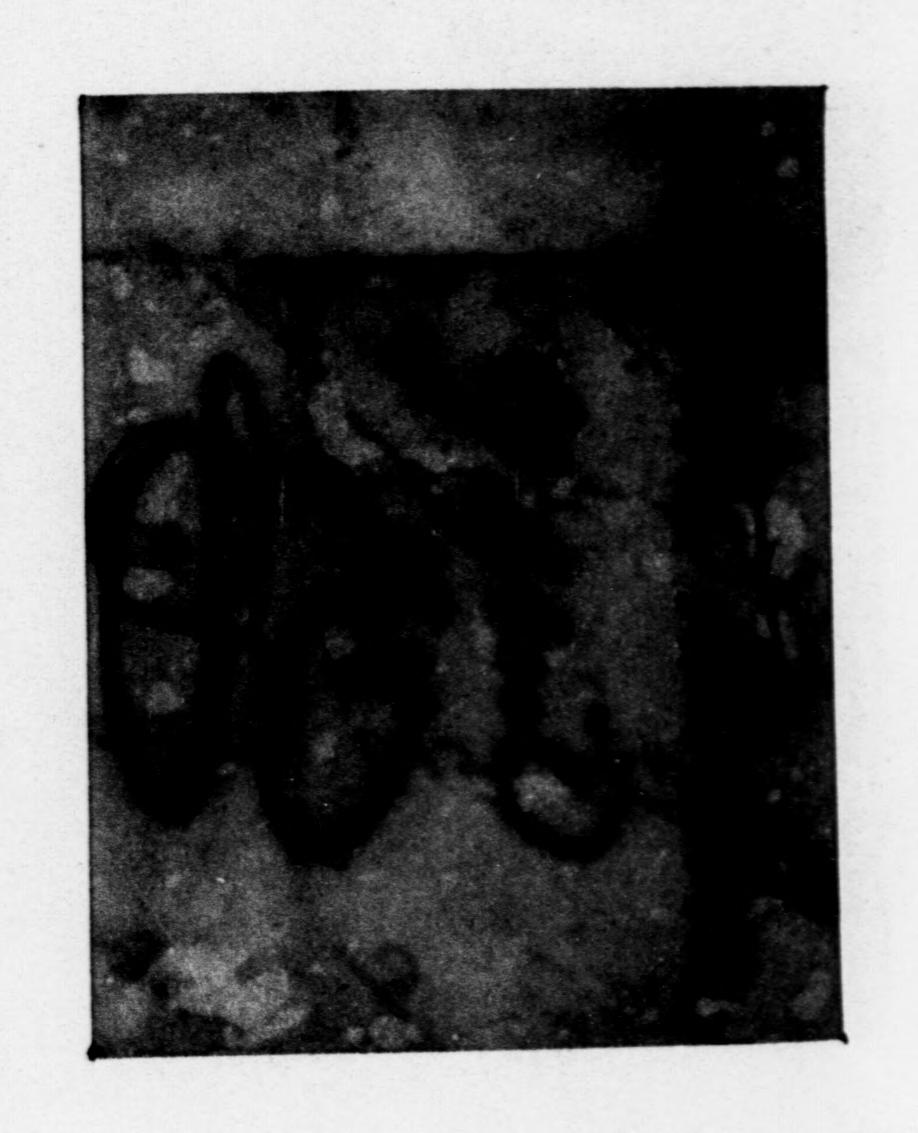